We’ve all heard someone say that you shouldn’t buy a Toyota because “all the profits go to Japan.” Talk about hypocrisy. People think it’s wrong to support a global car company that’s spent $20 billion building plants in the USA over the last 20 years, yet they willingly fork over their dollars to bankrupt GM and Chrysler so they can “buy American.”

Here’s a newsflash for all you “buy American” hypocrites: Toyota’s profits on one truck sale pale in comparison to the amount of money YOU send overseas every year. The fact is, we’re all sending thousands of dollars a year in profits to foreign companies – regardless of the type of vehicle in the driveway. Take a look:

First, let’s talk about the Tundra. If you buy a new Toyota Tundra for $30k, here’s where the money goes: 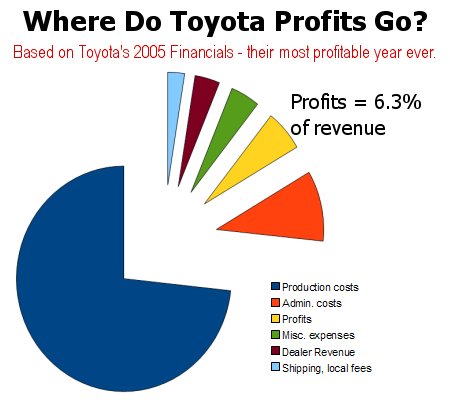 Toyota profit as a percentage of vehicle revenue.

The auto dealership keeps about 4%, or $1200. [NADA average dealership profile May 2009]. The people who ship the vehicle from the plant to the dealership pocket some money, there are some miscellaneous document fees, some gas to buy, etc., and we’ll say that stuff only costs $800 (the bulk of which is a destination charge). That leaves $28,000 in revenue for Toyota.

For argument’s sake, let’s ignore the fact that Toyota (like most automakers) lost a fortune last year and look at numbers from 2005 instead. Toyota earned $12.1 billion in profit in 2005, so let’s use those outrageously profitable numbers to figure out how much money could go overseas in a worst-case-for-America-best-case-for-Toyota situation.

According to Toyota’s 2005 financial report (see page 12), 10.8% of revenue went to general administrative and selling costs (i.e. marketing and advertising), 78.2% went to the actual production costs, and then another 4.7% went to miscellaneous expenses like interest payments, taxes, etc. In 2005 – the best year in the history of Toyota – only 6.3% of revenue was actually “profit.”

In other words, based on the best-case scenario $1,764 of our $30k Tundra is profit for Toyota…but really that’s only a guess. Toyota’s average numbers (as reported above) include every vehicle sold, from their super cheap micro cars sold in developing markets to their mega-expensive Lexus products. For the sake of argument, let’s go ahead and round our estimate up and say that Toyota makes $3000 on every Tundra they sell.

That means that a new Tundra – in the best Toyota sales year of all time – likely only nets Japan $2400. Considering that the average American buys a new car every 5-7 years, that’s about $400 per year that we send to Japan when we buy a new Tundra truck (give or take). Sound like a lot? Check this out: 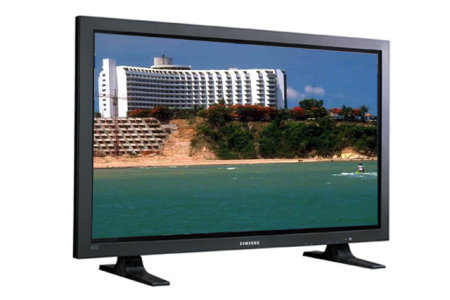 The average American household spends more than $1200 a year on foreign-made electronics.

1) The average American household spends $1200+ on consumer electronics every year. We all know that few (if any) electronics are made in the USA, so a big chunk of that money definitely leaves and never comes back. For arguments sake, let’s say that half of that amount is captured by retailers in the US and that only $600 a year is sent overseas on consumer electronics…that’s more than a new Tundra. 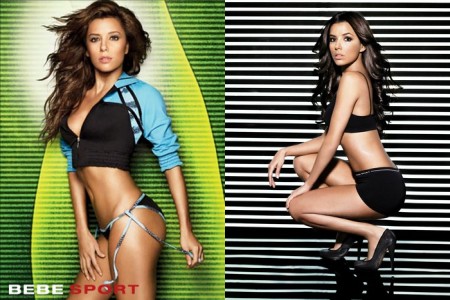 2) The average American household spends $1881/year on clothing and apparel (cool chart, btw). Much like electronics, almost no clothing is made in the USA. Some estimate that 97% of all clothing is made outside the US. If we assume only 30% of the amount spent on clothing goes overseas and never comes back, over 5 years the average American household sends more money overseas buying clothes (more than $2,800) than they would have sent buying a new Tundra. 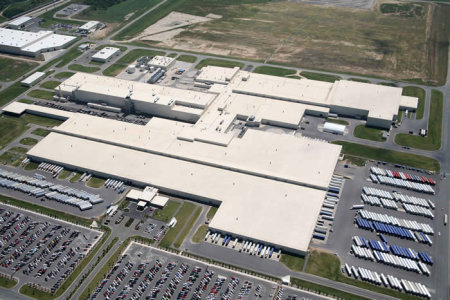 4) Let’s go back to our Tundra profit figures. In 2007 Toyota (and affiliated suppliers) made a total investment in San Antonio of more than $1.2 billion (see timeline). How much profit is Toyota really making on the Tundra? The San Antonio plant has made somewhere between 300,000 and 350,000 trucks over the last 3.5 years…there’s no conceivable way that Toyota has recovered their $1.2 billion investment yet.

So here’s the bottom line:

1. People advocating that we should all “buy American” don’t understand global economics. If they did, they would recognize the problem isn’t with the Tundra…it’s with foreign oil and our society’s infatuation with consumer products we really don’t need (flat-screen TVs and designer jeans, for example).

2. Toyota is a global company. Despite the fact their name is Japanese, they make cars in the USA, they have US workers, and the Tundra is actually “more American” than the Dodge Ram or the Chevy Silverado.

3. A lot of the “buy American” sentiments are based on fear. Toyota isn’t bad for the U.S. economy – no company that builds 1.1 million cars and trucks in the USA is bad for America. If you want to call out Toyota because “all the profits go to Japan,” you need to call out yourself too.