Dimitrious P. Biller, former managing counsel for Toyota’s National Rollover Program, has filed a lawsuit against Toyota alleging a conspiracy to hide evidence in numerous roll-over lawsuits. Specifically, Biller alleges that Toyota withheld data regarding vehicle roof strength in a series of lawsuits he oversaw between 2003 and 2007. This conspiracy, if proven to be legitimate, would fall under the general category of “racketeering.”

When Biller made his claims earlier this year, many attorneys asked to re-open previous rollover lawsuits against Toyota. However, after reviewing Biller’s conspiracy evidence, an independent attorney in Texas decided not to re-open 17 rollover cases he had previously pursued.

According to Texas attorney E. Todd Tracy, who represents victims in 17 Toyota rollover cases, “It’s my belief, after reviewing these documents, that the evidence [presented by Biller] will not assist my suits…I’m disappointed beyond belief.” (link)

This information seems to support the conclusion that Biller’s lawsuit against Toyota is frivolous.

Biller, a former Toyota employee, has an interesting past. In addition to helping Toyota successfully litigate a dozen rollover lawsuits, Biller also represented Ford Motor Company in a series of product liability lawsuits in the early-to-mid 90’s. According to his website, Biller is an experienced attorney in the realm of product liability who has made a living representing big companies. 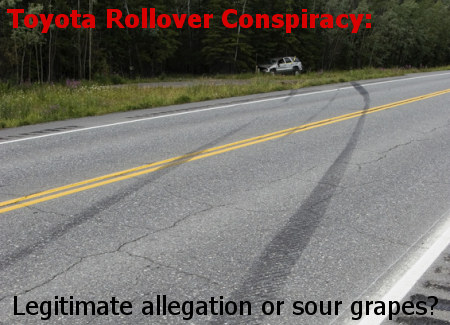 According to the CBS report, Biller’s tenure with Toyota ended when he attempted to “blow the whistle” on Toyota’s alleged practice of withholding and destroying vehicle roof strength data. CBS states “resulting conflicts [at Toyota] ultimately caused Biller to suffer a mental breakdown and led to his forced resignation in September 2007. He left with a $3.7 million severance agreement, court records show.”

Really? The guy who made a small fortune representing big companies in product liability cases tried to blow the whistle on a conspiracy, and in the process suffered a self-admitted mental breakdown? Seems sort of suspicious…especially when you see his letter of recommendation from Chris Reynolds, Toyota Motor Sales USA VP and General Counsel (found on Biller’s website).

[Sidebar: Chris Reynolds is also named in the lawsuit. Guess that letter of recommendation wasn’t appreciated.]

Still, it’s certainly possible that Toyota forced Biller out. In an article about Biller from the May 2001 issue of California Lawyer, Biller was referred to as “the kind of person that if he smells a rat, he will not let them wiggle away.” (Found on Biller’s website.) This would seem to support the idea that he’s the whistle-blowing type.

Skip ahead to July 24th, 2009, when Biller filed a lawsuit against Toyota (and others) alleging a conspiracy to withhold data regarding vehicle roof strength. Biller’s lawsuit alleges a “ruthless conspiracy [to keep evidence] of its vehicles’ structural shortcomings from becoming known.”

In a statement made to CBS News, Toyota:

At this point, we are not able to access the legal filing. The CBS report had a link to a PDF, but that link is currently broken (possible as a result of Toyota’s request for sealed records). We’ll keep working over the weekend to get our hands on the document.

2003-2007: Biller represents Toyota in one dozen roll-over liability cases, winning each one and saving Toyota millions.

September 17th, 2007: Biller resigns from Toyota. In the lawsuit he filed nearly 2 years later, Biller alleges that he was forced out and suffered a mental breakdown as a result.

September 11th, 2008: Biller registers LDTConsulting.com, a website for what appears to be his private practice.

August 31st, 2009: California judge seals all the evidence of a conspiracy that was presented by Biller.

December 28th, 2009: A Texas attorney representing 17 Toyota rollover cases declines to re-open any of his lawsuits after reviewing Biller’s evidence. This would seem to be a vote of no-confidence in Biller’s claims.

Here are the obvious questions:

1. If Biller believes a conspiracy existed, why did he wait nearly 2 years to file a lawsuit? Did he learn of the conspiracy after he left Toyota?

2. Why would Toyota offer Biller a letter of recommendation 6 months after he resigned?

3. What if Biller is right? Rollover problems cost Ford billions in 2001. If these allegations are true, this would be a major blow to Toyota’s reputation.

We’ll keep you posted on any developments. Please comment below if you know anything, if you have a link, or if you’d like to share your opinion.