By this time, we’ve all seen the Clint Eastwood “Halftime” ad from Chrysler. It’s well produced, classy, and – depending on your point of view – inspiring. The ad wants you to believe that, much like Detroit, America can bounce back from tough times stronger than before.

The trouble is, this whole notion of Detroit “bouncing back” is a lie. Detroit was saved from collapse by an Italian conglomerate, the American taxpayer, and good timing. Let me explain:

The following is a guest post by Oleg Gudonov.

In Russia, we have saying: Do not kick old man or you will need new knee and new windshield. It is new – my country just start saying it yesterday.

In video below, you learn why we have this saying:

Old man honking horn might have been out of line, but young man was huge jerk. Punch or two? No problem. Open door and start kicking? Big time jerk.

GM Says No Magnesium Alloy Truck Frames – At Least Not Yet

As fuel economy regulations force automakers to tighten their belts, manufacturers are looking to pull a few different “levers” to improve efficiency. Those levers are drivetrain efficiency, aerodynamics, friction losses, and weight. 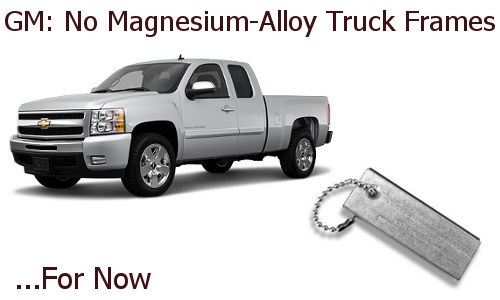 General Motors, seeking to make their truck as fuel efficient as possible, researched the possibility of a Magnesium alloy truck frame. However, according to a recent tidbit in Automotive News, those plans are dead…at least for now.

A frequent commenter here on TundraHeadquarters.com (shout out to mk) posited an interesting thought: It makes more economic sense to buy a new Toyota Corolla than it does to buy a new Prius, because it would take years of driving and gas savings to recover the cost difference between the two.

Said another way, the $5500 price difference between the Prius and the Corolla buys a lot of gas. Right?

While I was completely inclined to agree with this idea, I decided it might be fun to run the numbers. Here’s how I broke things down.

OK – since we’re a Toyota fan site let’s get one thing straight: any four pickups could have done this. Four Fords, four Rams, four Nissans – they all have enough torque to pull down the facade on an already partially demolished building. SO, if you’re a “Chevy is number one” kind of person, and you think this video somehow proves that Chevy’s are the greatest, you’re delusional.