Seat covers have come a long way since the days of fuzzy faux-fur and cheap elastic straps. These days, if you are tired of the look of the seats in your Toyota Tundra you can choose between a bewildering variety of materials with which to recover each throne, ranging from basic patterns all the way up to form-fitting full leather sleeves.

One of the biggest seat cover manufacturers currently on the market is CalTrend, which has been in the accessory business for more than two decades. Based out of California, CalTrend is most notable for the fact that it produces a startlingly wide range of custom-fitted seat covers…it is possible to select from 11 different cover materials. 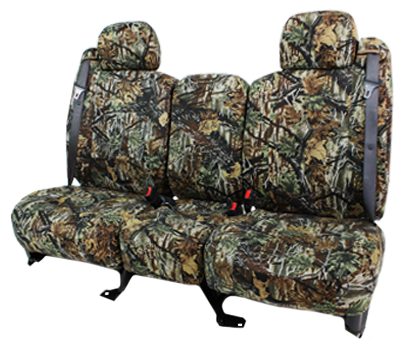 Camouflage seat covers - great for when the deer are hiding inside your Tundra's cabin.

The seat cover fabrics used by CalTrend can be roughly lumped into a few specific categories.

When Jason was at SEMA this year he was able to speak to several different representatives from truck tool box companies about the details of their various products. What emerged from the interviews was a series of interesting takes on what goes into making a solid, safe and secure tool box for the truck bed of your Toyota Tundra. With that information in mind, we’ve put together a brief tutorial to help you use this knowledge to your advantage when selecting a tool box of your own. Special thanks to the video assist from Orion Newman of Better Built tool boxes.

One of Orion’s main recommendations was to choose a tool box built out of a single piece of aluminum, reducing the number of welds to a bare minimum. Obviously there is the need to fully weld each of the five lower pieces of the box to each other, but aside from that each “side” of the box should be cut from a single piece of metal. This dramatically improves the overall strength of the box.