Stock four-wheel drive Tundras don’t offer a traditional locking differential. Instead, they come with a feature called “Auto LSD” that uses the traction control system to automatically reduce wheel spin if a loss of traction is detected. In theory, this can help get you going if you are stuck in mud or any other low-friction surface, but it doesn’t offer the same level of instant torque distribution offered by a mechanical locking differential.

It’s also important to note that “LSD” means limited-slip differential, which implies that while some wheel spin can be avoided, full locking is not in the cards.

A true locking differential, such as the ARB Air Locker, does not allow a vehicle’s axle shafts to rotate independently. This means that it’s impossible for one wheel to sit and spin on ice or gravel while the other wheel remains immobile. By using mechanical gearing to force each axle to move forward or backward at the same time, power no longer follows the path of least resistance but is instead proportioned out so that it can be used to get going and stay moving. 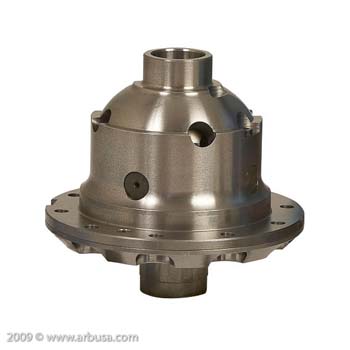 The ARB Air Locker offers an advantage over other locker kits for the Tundra due to the fact that it can be remotely switched on and off from inside the passenger compartment. The ARB unit makes use of a 12-volt air compressor that activates the axle lock when it is needed. This means that the differential can be left in an “open” or unlocked position during normal driving.

If locking differentials are so much better than open differentials, why doesn’t the Tundra come with one from the factory? In the same vein, why would anyone ever want to deactivate the ARB Air Locker?

While it is true that a locking differential prevents wheel spin, the principle behind its action can create problems when driving at higher speeds. Specifically, since each axle must turn at the same rate, while cornering a locker can introduce binding or chatter since the wheels on the outside of the corner cannot turn independently of those on the inside. This noise, harshness and reduced handling capability is often a turn-off for all but the most hardcore off-roaders.

Since the ARB Air Locker allows for its locking mechanism to be deactivated when not on the trail, it lets the Tundra drive on the pavement with an open differential which in turn allows for the axles on either side of the truck to spin independently.

While many Tundra owners will be happy with the operation of their Auto LSD setup, those seeking to improve their truck’s off-road capability without compromising daily driving comfort would do well to consider a remote locking differential such as the ARB Air Locker.