A Tundra Lowering Kit That Doesn’t Use Springs – A Review

Ya – that’s right. We’re reviewing a lowering kit for the 07-and-up Toyota Tundra that doesn’t use new springs to drop your Tundra. TundraRacing.com provided us with a rear leveling kit for a Tundra regular cab, along with the extra parts we needed to take the same Tundra down another 2″ (from level). That works out to about a 5″ drop in the rear, and about a 2″ drop in the front. The best part of this kit? The truck rides better dropped than it did stock!! Amazing! 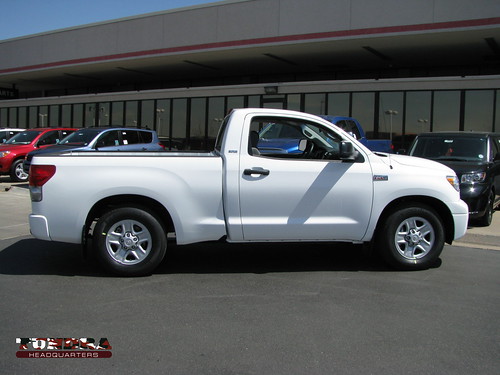 The lowering kit from Tundra Racing rides better because it doesn’t really change the stock suspension. The kit simply moves the rear leaf springs below the axle (creating about 5″ of drop in the process) and adds a new spring perch to the front coil assembly that drops the front 2″. Since the stock springs and leafs aren’t modified, the stock ride is maintained, as are the stock payload and tow ratings. Even better, because the front springs aren’t pre-loaded when they’re installed, the front suspension is actually just a touch softer. Additionally, because the lowered truck is also level, the weight is more evenly distributed front and rear. That makes the rear end less “bouncy” and the front less stiff. Add it all up, and the truck rides better with the lowering kit than without it.

Handling with the lowering kit installed is MUCH better than stock. The truck’s center of gravity drops quite a bit when the lowering kit is installed, so there’s a lot less body roll and more lateral stability. It’s not a sports car, but it feels a lot better than a typical Tundra in the corners. Interestingly enough, this is the same kit Toyota installed on three Tundras that were raced around the country featuring TRD parts. Check out this Tundra racing video – the kits on the trucks being driven are the same as the kit we’re reviewing. 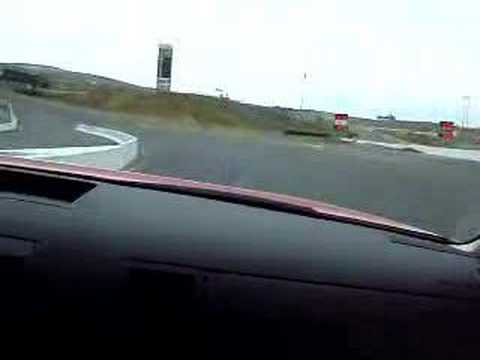 The Tundras in this video were dropped using the TundraRacing kit we’re reviewing.

Onto the installation process. To lower the rear, you’ll need to move the leafs below the axle, attach the new shackle hardware, and install new shocks. This process is pretty straightforward and doesn’t require much in the way of special tools – an air wrench would be nice, but you can get it done with a set of english and metric wrenches and sockets, as well as a good torque wrench. Dropping the rear suspension is the same as installing the Tundra rear-end leveling kit we covered last week, except the mounting points on the new shackles are just a little higher (closer to the bottom of the bed). When you add the new shocks, make sure to attach the bushings provided.

Installing the new spring perch up front begins with pulling the stock coil assembly. You’ll need to remove the front wheels, skid plate (if equipped), then disconnect the sway bar end links and the shock mounting points. It’s up to you how much more of the front suspension you want to unbolt, but the more you take apart the less prying you’ll have to do to get the coil assembly out. 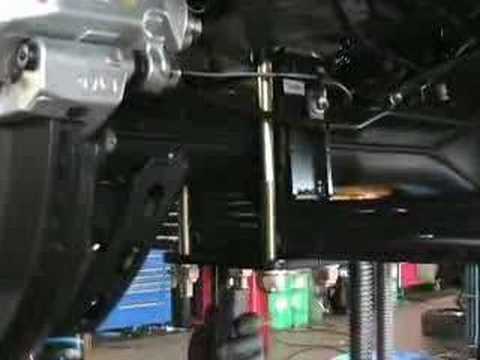 TundraRacing.com 2″-5″ Lowering Kit Installation Video. Special thanks to Ryan Prue and Tanner Tilton at Stevinson Toyota East in Aurora, Colorado for working with us on this installation.

Once you’ve got the coil assembly out of the truck, you’ll need to take the pre-load out of the springs using a spring compressor. NOTE: Don’t be a dummy. Pre-loaded springs are very dangerous. Take proper precautions and use the correct tools to remove the pre-load. You can always take the compressed assembly to your local shop or auto parts store where they will decompress the spring for you for a nominal fee.

You only need the spring compressor to decompress the springs – they aren’t pre-loaded when they’re re-installed.

Take the shocks out of the springs, remove the dust cover (you may have to cut this piece off, but it’s really not necessary in the first place – most-after market shocks don’t use dust covers because the shock shaft is self-cleaning), and using a rubber mallet, knock the stock spring perch off the shock. Now take the new spring perch sleeve and rest and fit them onto the shock. Epoxy the sleeve to the shock, then epoxy the rest to the sleeve. The epoxy is needed to prevent the spring from rotating as it compresses. Now, when you reassemble the coil assembly, you’ll notice that the front springs are basically loose. There is little or no compression on the springs now, and the lack of pre-load will result in the front end of the truck dropping about 2″ below stock when it settles. Pop the coil assembly back into the truck (always easier said than done), reconnect everything and torque, and you’re all done. Just don’t forget to check and re-torque bolts if necessary after about 100 miles of driving. 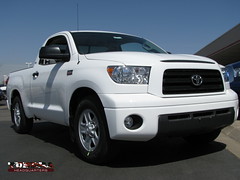 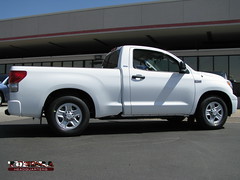 The warranty on this kit is average – 90 days if you install it yourself, 1 year if an ASE certified mechanic installs the kit. As far as price, we think $699 is pretty fair. Compared to TRD’s lowering kit, which costs about $1500 and makes the ride significantly worse, Tundra Racing’s kit is a great deal. The Ground Force lowering kit, which we have not driven, costs about $1000, but that includes new springs and leafs. We’re going to guess that the Tundra Racing kit is at least comparable to anything out their in terms of ride (if not much better), so $699 seems like a good deal if you’re concerned about the truck’s ride. If you get the TundraHeadquarters discount, even better (see below for details). As for handling, we’ll have to hold off on comparing this kit to others. Having said that, you really can’t go wrong with this kit. It’s hard to imagine any lowering kit feeling substantially better handling wise – at least not without significantly reducing ride quality.

Bottom Line: This is a very nice kit. Every part is high quality, the customer service is excellent, and the finished product looks good, rides, and handles great. Toyota has purchased numerous kits from Tundra Racing for use on their demonstration and show vehicles – including the trucks being raced in the first video above. If you’re in the market for a lowering kit that won’t ruin your truck’s ride (not to mention payload and towing ability) look no further than TundraRacing.com. If you want to order the kit, mention this review and TundraHeadquarters.com for a 10% discount and free shipping (for a limited time). We highly recommend this kit.

Check out the full instructions for this kit.