Now that the all-new 2014 Chevy Silverado has been unveiled, critics and fans are asking the same question. Does it have enough changes to re-engage Chevy truck buyers? Could this be the truck that ultimately brings Chevy back into the full-size truck discussion? You be the judge. 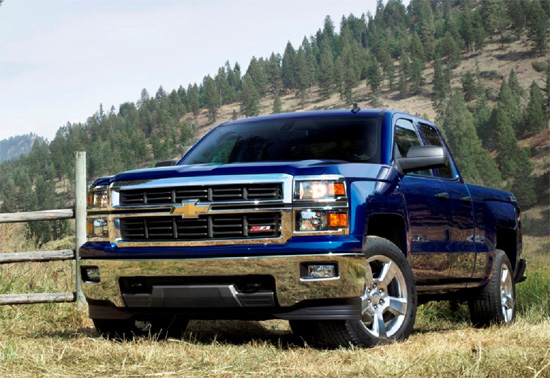 The new Chevy Silverado is “more muscular, more functional and more aerodynamic” according to Chevy. Will it wow customers?

The Chevy Silverado and GMC Sierra’s haven’t been meaningfully changed for many, many years. With a stagnant truck line, GMC has had a hard time rekindling investor and customer interest in the brand enough to increase the stock price so the U.S. Treasury will sell finally their shares (see: payback taxpayers). This means the new full-size trucks have a lot riding on them especially with how much automakers profit on these full-size behemoths. Let’s go over the new 2014 Silverado.

Chevy is hoping that the new “high-strength” steel and aluminum equal durability and weight savings (see: higher MPGs). While there was some speculation that we would see some plastic to drop more weight and jack up the MPG, it seems steel, hydroforming and aluminium is where Chevy is headed. All the Silverados will have this “high-strength steel” throughout the frame, cab and main rails and major cross members. Chevy says that about two-thirds of the cab structure is made with this steel. It will also be used throughout the rocker panels and underbody.  The idea is that this material will make the truck lighter and produce a quieter ride. Chevy says it the truck will feel more solid and refined to buyers than previous versions.

The bed is also make from a roll-formed steel which Chevy says is lighter, stronger and ultimately more durable than anything else on the market. And the hood is made of aluminum.

All of this material should add up to a substantial total curb weight drop. That figure though isn’t available yet.

On the front end, gone is the three-bar grille (yippee) and replaced is what resembles the more traditional styling of Chevy products. Chevy says they have gone through and worked hard to close every gap on the front end to create a more aerodynamic look. And it sure looks like it. While the front end still has the “I’m a TRUCK” look to each, you can see some places more curves that allow the air to flow more efficiently around it.

The side profile is fairly straightforward and nondescript. It has the exaggerated wheel wells that extra sheet metal provides and the now common aerodynamic hood/windshield look. 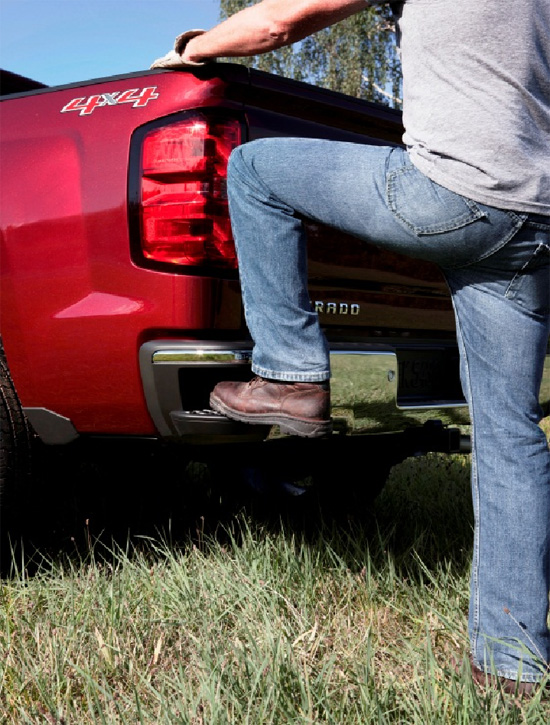 A smart addition to any full-size truck is a bumper step. This should be a standard feature on all of them.

While Chevy didn’t provide a great shot of the rear profile in their press release, it does show a taligate step (CornerStep bumper) and handholds inside the bed. This addition is frankly a no-brainer and a great use of the usually empty bumper space. It should be a standard feature on all full-size trucks. The bed also is easier to open and close and has “under-rail light-emitting diode lighting.” 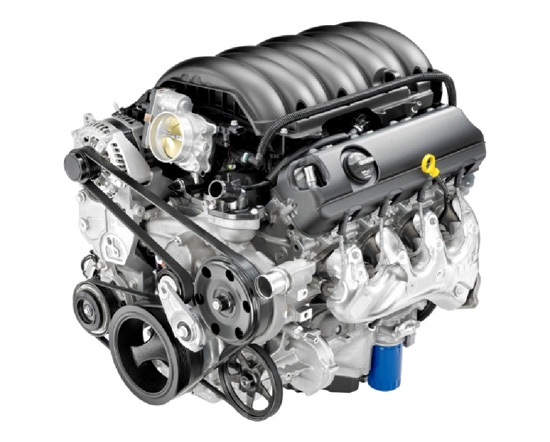 Alright, here is what most truck buyers wanted to know. How will the Silverado pickup compete with the Ford EcoBoost and the Ram 1500 which claims 25 mpg? Well it is going to offer a new 4.3L V-6, 5.3L v-8 and a 6.2L V-8. These all-aluminium engines will be direct fuel injected, still use the pushrod technology, have continuously variable valve timing and will have the trendy cylinder deactivation feature (you know when you aren’t towing a space shuttle). Chevy says that each of these engines can “seamlessly switch” to four-cylinder mode for everyday driving.

Unfortunately, that is all we get to know right now. The final stats like torque and MPG are promised to be released early next year. 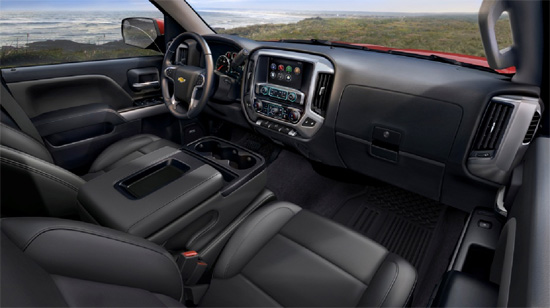 Spacious with a new 4.2 inch infotainment display is combined with what Chevy says is a comfortable, smooth ride should make it more appealing to customers over previous versions.

The interior is a big improvement with a new dash, gauge setups and a 4.2 inch infotainment touch screen. Some of the controls like the optional trailer-brake controller have been moved. It also looks to be roomier than previous models with lots of leg room.

GMC has done some reworking of the crew cab which will have larger rear doors to help get in and out. Also, it will feature a 6’6″ box option for the crew cab as well. There will still be an Z71 off-road version with upgraded shocks and tires. Plus, all of the new trucks feature the latest in advanced safety features like:

While we all know that GMC will probably produce towing numbers for the new trucks that makes it the “top of the class in towing,” those numbers are really laughable these days. Until all truck manfuctures adopt the SAE standards, include us in the group of disbelievers (however, we do believe Toyota since they do follow the standards).

Also, GMC continues to say there trucks have the lowest cost of ownership. They point to a report by the analysis firm Vincentric as proof. Although Vincentric did also say that the 2011 Best Value Truck was the F-150 and everyone else  like KBB, Intellichoice says it is the Tundra.

What do you think? How will this new truck compete?