Chrysler has been hard at work on its new Ram 1500 and one of their interesting ideas is a blast from their past, a shifter dial to replace the traditional shifting lever. Yep, just like changing stations, you can change what gear your transmission is in. Weird or cool? 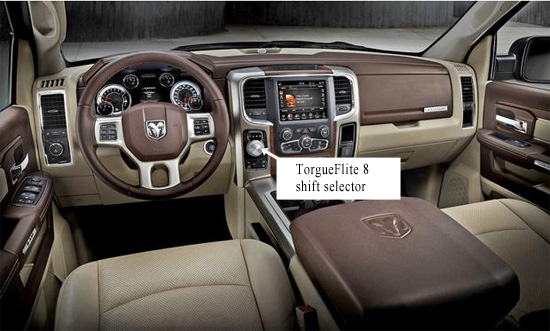 The new 2013 Dodge Ram features a TorqueFlite shifter knob to change gears. An odd idea or will it catch on?

The new 2013 Dodge Ram 1500 debutted at the 2012 New York Auto Show with its new shifter that really does look like a radio knob. It is named the TorqueFlite 8 which is like the push-button transmissions Chrysler built in the mid-1950s.

According to Autonews.com, “The pickup has a rotary dial to the right of the steering wheel for the P-R-N-D functions of the automatic transmission. There also are button controls for manually selecting gears 1-8 of “Drive” for those who don’t want gear selection to be done automatically.”

The TorqueFlite name was first used by Chrysler in 1956 when it was added to the Chrysler Imperial sedan. It was a push-button type system with buttons normally located at the driver’s side. The first TorqueFlites featured three forward gears plus reverse. Each gear would have a button like P, R, N, D, First, Second. The idea lasted until 1965 when the column shifter gained favor. The name continued though and was last used in 1993.

The name is still trademarked by Chrysler and its revival concides with many recent changes to the Ram 1500 aimed at improving gas mileage. Chrysler has been working on some new items like including Grille Shutters, Stop-start system, V-6 with 8-speed transmission and a CNG-Bifuel Ram.

However, unlike the TorqueFlite, most of these changes the driver may not notice. The TorqueFlite will definitely standout. Yet, will it be as a “Wow, isn’t that cool, I wish other trucks were like that” or “What the hell is that knob for, how do I shift this thing?” What do you think?