What it Is and What it Does: The Wagan Tech Cigarette Lighter Jump Starter is a self-charging emergency 12V battery back-up / jump starter. If jumper cables aren’t available, this little device has a shot at getting your car or truck started (note: it only has a shot – more on that below).  In addition to an emergency battery, it’s also a very convenient 12V battery source that will fit in your jacket pocket (15″ by 4″ by 4″ – about the size of a large flashlight). 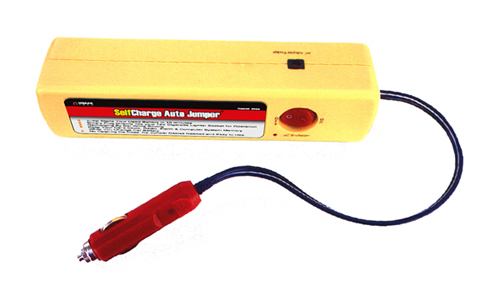 The Wagan Tech Cigarette Lighter Jump Starter will get your truck moving when it has a dead battery.

Who It’s For: The “auto jumper” can be used by a motorist who has an emergency battery situation, but there’s a catch: the auto jumper only has a 1.5 amp hour battery capacity, which isn’t going to do much if your car battery is stone-cold-dead. However, if it needs a little boost, this just might help.

What Owners Say: Owners who have tried to use this device to jump-start a dead battery usually aren’t happy. Considering that Wagan bills this as an emergency jump starter, their unhappiness is understandable. However, owners who have used this to help a weak battery start are satisfied, and for what that’s worth often times batteries are only weakened rather than dead. Still, the average review isn’t too hot for this device.

Who Makes It?: Wagan Tech, a 27 year old company that makes a wide variety of electric accessories for cars – from much larger jump boxes to DC inverters to gimmicky interior gadgets like heated coffee cups, seat massagers, etc.

How Much? AutoAnything.com sells the Wagan Tech Cigarette Lighter Jump Starter for about $40.

Bottom Line: If you’re looking for a real battery back-up, this $40 device probably isn’t going to make you nearly as happy as a $120+ jump box that contains a real lead-acid battery. However, for what it is, it’s not a bad deal.