In this second part of our Q & A with Jack from Unichip (read part one), one the automotive aftermarket’s premier chip tuners, we dive a little deeper into the often confusing interaction between performance accessories and engine computers, and how these interactions affect a performance chip’s programming. 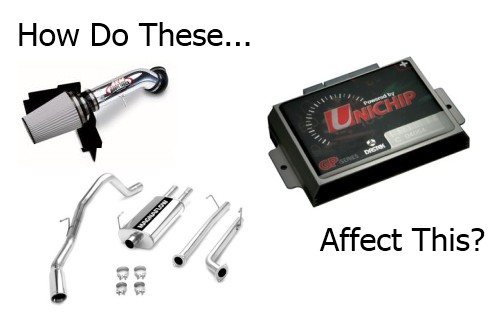 How does Unichip customize engine tuning for air intakes and exhaust systems?

In other words, if you want to learn a little bit about how air intakes and exhaust systems impact your truck’s computer system, read up.

The Effect of Engine Mods

We asked Jack if there were any types of performance modifications which would require special consideration when Unichip programmed a tune for a specific Toyota Tundra.  Specifically, we were curious to know how much impact air intakes and exhaust systems had on performance chip tuning.

The answer that Jack gave us was a bit surprising, and fairly in-depth. Boiling his response down to the key points that he wanted to communicate:

Jack explained that many after market cold air intakes use a number of mechanical ‘tricks’ to manipulate data from the airflow sensor and convince the ECU to advance engine timing. The usual trick is to change the diameter of the air intake tube in order to effect the readings of the mass air flow (MAF) sensor. If you can slow down the air that crosses the sensor, the engine will assume airflow has decreased. It will then run slightly lean, which is usually good for a few extra horsepower.

The problem with this trick is that it really only works for a specific RPM band. This is why air intakes often seem to “take” power from one RPM band and “give” it to another – they’re relying upon a mechanical method to influence a digital reading.

In contrast, headers and catback exhaust systems that allow for greater airflow don’t interact with the ECU at all. Sensor data remains true with or without an after market exhaust upgrade, which means that a new muffler or set of headers are less likely to mess with your truck’s power curve than an air intake. This doesn’t mean that air intakes aren’t a worthwhile upgrade – it only means that exhaust upgrades have a more consistent impact on power than an air intake…at least on trucks without a Unichip programmer!

When Unichip custom programs a tune for a specific Tundra, they need to know exactly what CAI is installed. Using this info, they can customize the readings from the MAF sensor to account for any intake tricks and smooth out the power curve. This gives you the best of both worlds – an air intake that’s less restrictive and an engine computer that corrects for less than optimal MAF readings outside the air intake’s ideal RPM band.

How Hard Is a Unichip Re-Flash?

Because each UniChip must be custom tuned to a specific truck, we asked Jack if it was difficult to re-flash a Unichip tune should an owner modify their truck in the future. He told us that the process was as simple as removing the Plug ‘n Play harness and plugging the OEM plugs back into the ECU, which returns the vehicle to its stock engine management. The chip can then be sent back to Unichip to be reprogrammed for a nominal fee of $25, plus shipping costs. Jack again stressed that there are not many modifications which will require a reflash, but the CAI installations or internal engine work typically did require a new program.

Since Unichip designs each of its tunes on a physical truck that has the same after-market equipment as a customer’s vehicle, there are situations when Unichip doesn’t have a program for a particular set of components. In these situations, there are a couple of different options for owners.

The first is to take a chance with a tune that is very close to the specific modifications that a customer is running. This is usually a perfectly acceptable option. However, if you’re really trying to squeeze every drop of power out of your engine, Unichip offers a Custom Tuner program where professionals can meet with truck owners and provide them with a tune unique to their vehicle.

Finally, if you’re a professional tuner or a die-hard enthusiast, Unichip offers their Uni-Tune kit. This allows people to tune Unichips themselves using nothing more than a home computer (but a dyno seems like essential equipment too).

In the next part of our Q & A series with Jack, we’ll get a chance to hear his thoughts on gas mileage, towing, and performance chips.

For some really in-depth info, check out Jack’s Unichip blog.