Tundra TRD Dual Exhaust Is Back

When the 2nd generation Toyota Tundra debuted in 2007, one of the things Tundra buyers liked was the option to buy a Toyota-authorized TRD cat-back exhaust system. Rather than buying an after-market exhaust system and worrying about performance, sound characteristics, and quality, new Tundra buyers could go with a system backed by Toyota. 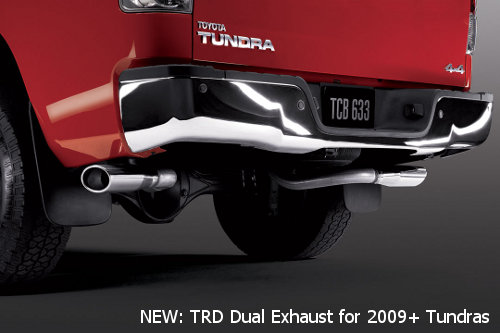 However, for some inexplicable reason, Toyota canceled the TRD exhaust system at the end of the 2008 model year. Up until last week, anyone who wanted a TRD exhaust for their 2009-2011 Tundra was out of luck. However, TRD has corrected this oversight with a new Tundra exhaust system for 2009-and-up Tundras.

Here’s all the info:

Notes: Made from 304 stainless steel, the kit uses all the factory hangers and includes stainless steel exhaust tips that have been stamped with the TRD logo.

We tested the TRD dual exhaust in 2007, and at that time we said:

The Toyota Tundra TRD Dual Exhaust is excellent, but it’s a little overpriced. If you want to add a quality, factory-backed exhaust system that won’t make your truck sound like a dragster, the TRD product is an excellent choice.

Since the new TRD kit is about a week and a half old, we have not had a chance to test it. However, based on conversations with some parts managers, the new TRD exhaust kit seems to be very similar to the old one. Same basic design, same components, etc. Therefore, we’ll stick with our initial review unless we get some new info.

Between Toyota’s high parts cost and the fact that many dealerships mark-up parts 10-20% over retail, you might end up paying twice as much for a TRD cat-back exhaust than you would for an exhaust from Magnaflow, Flowmaster, or Gibson. You’ll also find that Borla’s premium quality exhaust system is less expensive too (depending on your truck and dealer).

Many Tundra owners assume that TRD’s exhaust system is the best choice because TRD parts do not effect your truck’s warranty. However, the same can be said for any after market exhaust system that’s properly designed and installed. According to the Magnusson-Moss act, it’s illegal for a manufacturer to void a warranty simply because a consumer uses an after-market part.

The only way a manufacturer can void a warranty is if they can prove the after-market part caused their product to fail. Considering that the most popular Tundra exhaust systems are backed by well-known manufacturers like Flowmaster, Magnaflow, and Borla, there’s little risk that any after-market exhaust could damage your Tundra.

In fact, at one time or another Borla, Flowmaster, and Magnaflow have all been sub-contracted by automakers to build factory systems!

While it’s wise to consider the impact that an after-market accessory can have on your truck’s warranty, simple add-ons like exhaust systems, air intakes, Unichip Tuners, etc. can not hurt your warranty…so don’t let those concerns keep you from considering a non-TRD exhaust sysem.

Bottom Line: TRD’s dual exhaust is a great quality system, and if you’re looking for a system that won’t ever bother your ears on the highway, it’s really a toss-up between the TRD kit and one from Borla. However, if you want something that sounds mean, a kit from Flowmaster or Magnaflow will probably make you happier.