Tug-A-Truck Is For Dumb Fools

De gustibus non est disputandum is a latin expression that’s survived nearly 2500 years because it’s very, very wise: It means that “there’s no accounting for taste.” Many motor sports are a question of personal taste. While it has a huge number of fans, there are those out there who have no interest in NASCAR due to its relative lack of road courses. Likewise, IndyCar racing is often passed over by race fans thanks to the perception that it is missing the hardcore, door-to-door racing that is largely impossible due to its open-wheel format. 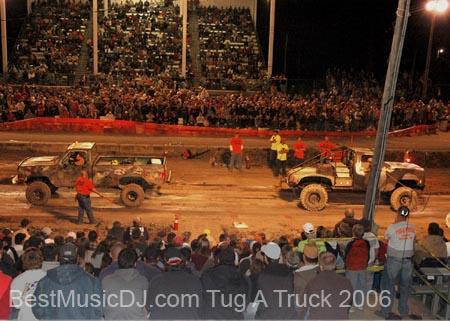 Tug a Truck is the sport of fools.

There are some types of vehicular competition, however, that would seem to be a universally bad idea – ‘Tug-a-truck’ is a perfect example. The rules of Tug-a-Truck are quiet simple: two pickups are linked together by a tow cable, a line is drawn across the tarmac, and then both drivers put the pedal to the metal. The “goal” of the “sport” is to find enough traction to pull your opponent over the line and thereby demonstrate just how amazingly masculine you are.”Hell yeah! Woo!”

If it sounds like I am not entirely enthralled with the concept of ‘Tug-a-Truck,’ then you are quite perceptive. I can honestly think of fewer motor sports that are potentially more damaging to your truck than this one. Here’s what I really hate about Tug-a-Truck:

First, truck frames were never designed to withstand this type of punishment. If two trucks rated at 8,000 lbs of towing capacity are pulling against each other with all their might, that’s at least 16k lbs of stress on the frame. If you say that the tow ratings have a safety factor of 1.5 (which is low), you’re looking at 24k lbs of pulling force. Add in the constant jerking motion that comes with tires fading in and out of traction and it’s a recipe for bending a frame. Bent frames aren’t cool – they result in unsafe and unusable vehicles.

Second, this “sport” is one of the single best ways I have ever seen to completely burn out every single component in a drivetrain. Since the pull continues until someone gives up, the heat buildup is more than enough to cook engines, transmissions, and rear differentials as the wheels spin. If you do manage to suddenly grab significant traction, the jerking force can be enough to snap a drive shaft, shear a suspension component, and cause transfer cases, transmissions, and differentials to explode. 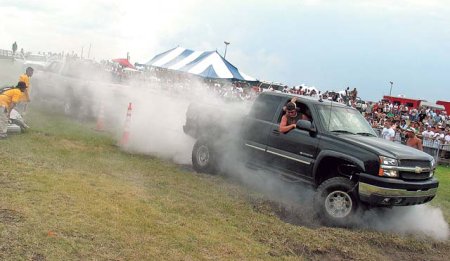 Third, there’s little to no skill required to compete. Sure sure they’re some strategy – it might be interesting to explore the best configurations (heavier is definitely better, different tires will help, etc.), and I’m certain that fast reflexes can be helpful. However, unlike just about any other motor sport I can think of, there’s little to no advantage to be gained by having any sort of skill. At the end of the day, the truck with the stronger driveline and the best tires wins.

Some might liken ‘Tug-a-truck’ to the truck and tractor pulls that have long been popular. However, the trailers that are being pulled don’t pull back with anything other than their sheer mass, which means that jerking forwards and backwards is never an issue, which means there’s less chance of destroying something. Tractor pulls aren’t exactly sophisticated, but at least the trucks and tractors are given a fair shake at survival.

Most importantly, what’s the honor in winning at Tug-a-Truck? The “winner” likely has significantly damaged their vehicle…that’s nothing to be proud of.

Comments? Am I missing something?