Toyota’s list price for a double-cab TRD Pro comes in at $41, 285, while the CrewMax is listed at $43,900. This pricing is based on the SR5 trim level, which comes with most of the features you’d expect on a new vehicle (windows, locks, air, cruise, etc.) but not much more.

Average price paid for 2014 Ford Raptors, taken from Edmunds.com (screenshots shown). Click to verify the data for yourself.

The TRD Pro Tacoma Might Be The REAL Raptor Challenger

Finally, consider this: If F-150 Raptor customers are “real” off-roading enthusiasts rather than pretenders, the TRD Pro Tacoma has got to be on their radar.

After all, the Tacoma has a shorter wheelbase than the F-150 (which is important to off-roaders), is lighter (also important), offers a manual transmission (kind of a big deal), and costs even less than a TRD Pro Tundra. The Tacoma starts at “only” $35k for a 4×4 Access Cab with a 6-speed manual. 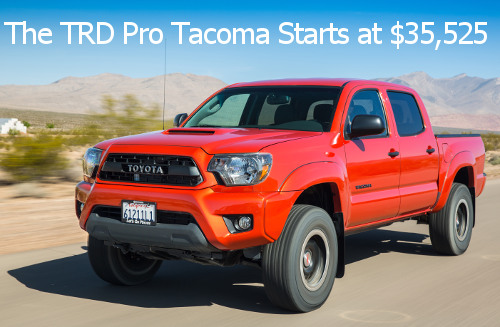 The TRD Pro Tacoma checks in at $35k, nearly $15k less than a new Ford Raptor. The Tacoma is also available with a manual transmission, something the Raptor lacks.

Ask any real off-roader to choose between a $50k full-size pickup with serious off-road racing abilities and a $35k mid-size with serious technical off-roading abilities (and a stick shift instead of an automatic), and the odds are good they’ll lean towards the TRD Pro Tacoma.