Here is the latest news from Toyota/Lexus. 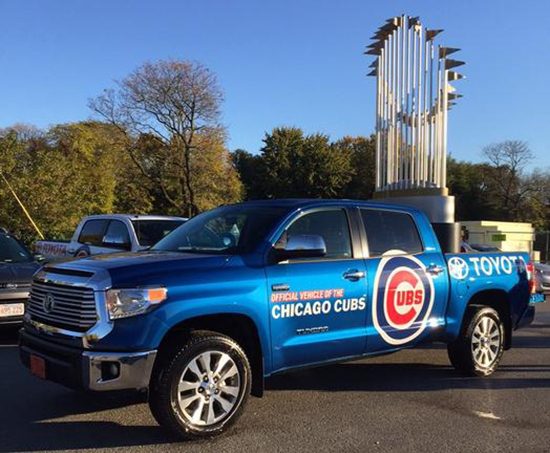 Need to carry a 10-foot tall trophy? No problem, the Toyota Tundra has it covered.

The compact crossover game is about to change at 12:45 p.m. PST, Thursday, November 17. Check out the reveal at:https://livestream.com/Toyota/LA2016.

Toyota, the official automotive sponsor of the Chicago Cubs and Wrigley Field, congratulates the Cubs on their historic World Series Championship! During the victory parade, a ten-foot-tall replica of the World Series trophy was carried in the bed of a 2017 Toyota Tundra. A second Tundra carried Clark, the official mascot of the Cubs, who waved to fans along the parade route. A RAV4, featuring an exclusive Cubs wrap, rounded out the lineup.

Toyota Goes to the Extreme with SEMA 2016 Builds

Toyota revealed an unprecedented suite of 30 vehicles on display at the 2016 Specialty Equipment Market Association (SEMA) Show. Toyota selected each vehicle to either honor the past, explore the present or reveal the extreme—and in some extreme cases, all three of these elements come into play. There is even a special display honoring Corolla’s 50 years.

Gordon Ting of Beyond Marketing, builder of the Prius G, has been selected to join the elite company of the top 10 builders in the third annual SEMA Battle of the Builders® competition at the 2016 Specialty Equipment Market Association (SEMA) Show. The Prius G is one of six “Extreme” vehicles that Toyota featured at SEMA.

Toyota Motor Corporation will establish a Mobility Services Platform (MSPF) to collaborate with various service providers, as well as telematics insurance.  Based on the proliferation and popularity of mobility services, like car-sharing; the MSPF will have various functions to support mobility services, and leverage the Toyota Smart Center (TSC), the Toyota Big Data Center, and financial services.

We are all moved by a great story about overcoming adversity.  After a bittersweet DNF at Lake Superior, the team bounced back in triumphant fashion over the weekend at the Empire State Performance Rally (ESPR). Ryan Millen, Christina Fate and their virtually bulletproof Rally RAV4 won the 2WD Class National Championship in NASA Rally Sport’s winner-take-all event.  National Championships are always something to be incredibly proud of, but to put an even finer point on the accomplishment Millen and the RAV4 finished second overall.  With that, they bested every single car in the competition, save one, regardless of class, drive wheels, power level or really anything else.

Congressional Medal of Honor recipient John Philip Baca was surprised with a Platinum edition Toyota Tundra, complete with a service agreement, pre-paid maintenance plan and $3,500 in gas cards, enabling him to continue his work with veteran and advocacy groups like American Soldier Network (ASN).

Toyota Makes Homes for Flying Mammals…Just in Time for Halloween!

OK, say you’re a bat and you’re in the vicinity of Toyota’s powertrain plant in Buffalo, West Virginia.  For the Bats of Buffalo, Toyota has a treat this Halloween season:  Bat boxes!  Little wooden bungalows where these mosquito-eating machines can snuggle in for a spell and hopefully take up residence during the warmer months to help control the insect population.