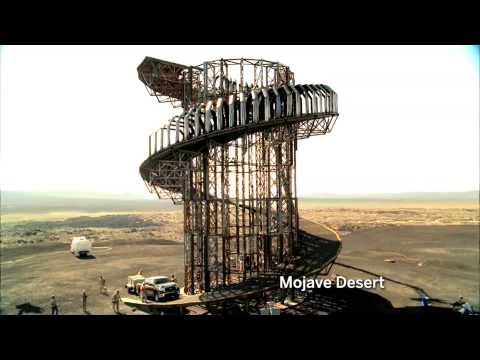 The most interesting aspect of this advertisement, other than the Tundra being able to pull such a heavy load undeterred up a fiery incline, is the fact that the entire thing was real. That is correct – Saatchi LA, the ad agency behind the commercial – took 2 months to design and actually build a corkscrew road snaking around a steel tower and then encased 170 feet of that road in a specially constructed flame oven in order to prove a point about just how durable the Tundra is.

Stunt driver Matt McBride, used to pulling duty in Hollywood films as one of the business go-to guys for dangerous work, was employed as the pilot of this inferno-bound pickup. He made 11 successful ascents of the steel road, each time hauling an extremely heavy trailer load.

Not only was the advertisement visually impressive, but it also proved a point about the Tundra’s inner workings. Outfitted with a 6-speed automatic transmission, the Tundra pickup in the ad was asked to take on a lot. First of all, towing 10,000 lbs up a steep, winding incline is a lot to ask of any pickup. It’s also enough to heat transmission fluid to a very high level – which makes this stunt even more dangerous. Once a vehicle’s transmission fluid passes the 175 degree Fahrenheit mark, it begins to lose much of its viscosity. Every 20 degree rise above this level can cut the life of the fluid by 50 percent, and if temperatures get high enough the fluid will actually “boil over” and instantly ruin the transmission…and place the driver in this sort of test in a very precarious position as well.

The making of video for “Killer Heat.”

So why is all of this important? First of all, the tower seen in the commercial was built in the Mojave Desert where temperatures are already much higher than what the average Tundra driver will ever have to face. When you throw in 170 feet of oven-baked driving and the potential for disastrous overheating (read flames and a truck falling 60 feet to the ground) is increased exponentially.

Of course, the Tundra performed admirably during each take, providing indisputable proof that the truck is one of the toughest and best-designed pickups on the market today. If there’s anything wrong with the “Killer Heat” commercial, it’s that it takes a real truck person to understand just how amazing this stunt was. People have known how towing effects transmission temperatures in order to recognize how much engineering prowess has gone into the Tundra’s drivetrain.

The Killer Heat ad was a huge undertaking to setup and safely pull off, but the value of such a stunning demonstration is indisputable.