Toyota Exports Expand – It’s All About The Weak Dollar

Recently Toyota announced that it will be adding the Kentucky-built Camry to its growing list of vehicles it will be exporting to South Korea. This growth in exports, fueled by a weak U.S. dollar, means the thousands of American factory workers that Toyota employs will have increased job security and a stable income during a very difficult economy. 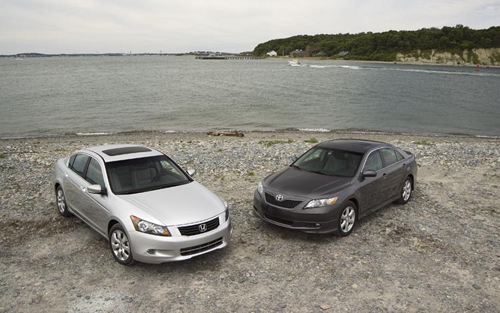 Toyota is expanding its list of American Made Cars for export adding the Kentucky built Camry to the list.

All of these exports add up to big growth in U.S. economic sectors like manufacturing, customer service and transportation. and they could even start a hiring boom. SO, the next time someone says that so-called “foreign” automakers are killing America, you can explain to them that not only is Toyota building cars in the USA – they’re exporting cars from the USA to other markets.

Toyota actually started exporting vehicles in 1988 and has seen their exports grow by 30 percent in 2010. The Camry joins the recently announced Sienna in going to South Korea. This growth has been helped by the fact that the U.S. dollar has fallen 11 percent through May 2011 when measured against a variety of major currencies (this, according to recent Harvard study).

How are exports and the falling dollar connected? Easy. American-made products cost our trade partners less to buy, which means that our cars are more cost competitive overseas…which means they’re easier to sell.

“We are pleased with the reaction that the redesigned Camry is receiving from our customers, and the sales success it is having in the U.S. and overseas,” said Yoshimi Inaba, president and COO of Toyota Motor North America, Inc. “The export of thousands of Camry vehicles to South Korea is an important development that builds on the great work of our talented U.S. team members as well as our extensive investments across North America to help maintain a strong, stable base of U.S. jobs. We look forward to other opportunities to continue growing exports from our American operations.”

Why is exporting a big deal? According to Harvard economist Martin Feldstein, even though only 10% of U.S. Gross Domestic Product comes from exports, export growth has driven more than a third of the increase in U.S. GDP over the past year.