Periodically Toyota’s communications team interviews executives and other individuals, journalists simply don’t have access to. Here is a great example of these interviews with CEO Jim Lentz. While he doesn’t share any shocking, breaking news items, I think his discussion on oil prices and the change in consumer behavior is spot on and is part of the reason why he has been cautious when he talks about spending more resources on truck development. Sure, trucks are hot right now, but what happens in 5 years which is about the time frame for when a new production facility could come online. Will trucks still be hot? If only we had a crystal ball. 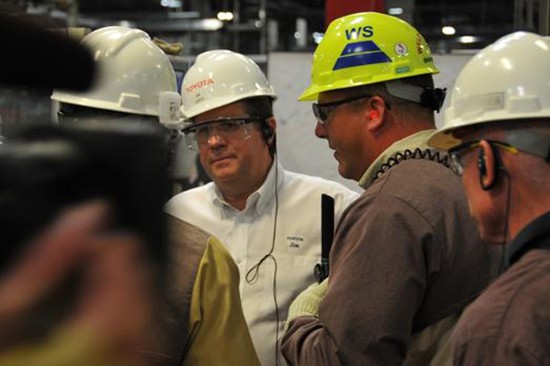 What event in your life means the most to your current success?
Probably when I was almost fired. I worked for a very traditional, hard-school manager. And he didn’t think that I could play that role. Thought that I was too soft on people. He basically said on a Friday, “Come back on Monday and you either tell me that you’re going to change or you’re going to have to find another job.”

I had to decide whether or not I wanted to save my career or do something that was really against my core values. It really helped crystalize what my values were: respect for people, integrity, working as a team. And it was really at that point I understood that my values matched the values of the company. The light bulb went off in my head that when it comes to success and happiness at a company, if those values can match, that’s when you’ve got that great marriage.

The other thing that I understood was I had always put my future in the hands of my manager, and I realized that was a huge mistake. Only one person is responsible for your career and that’s you. That was an important thing for me. I think the other important thing was to never let a manager destroy your self-esteem. So I think all of that really helped me understand who I was and I became much more confident in my abilities going forward.

So you come in the next Monday and you’ve figured out who you are. You’re still not what he wants.
Right. So I basically told him I’m not going to change. And he was true to his word. He gave me two weeks. I could either find another job or I was fired. And so I worked with some people I knew in the company and found a job in sales training. I took a demotion. I went to sales training and basically restarted my career.

Back then was the era of the tough-guy boss, but now you’ve got the idea of emotional intelligence, treating employees with respect and understanding their feelings. So do you feel vindicated that your choice has become more of the norm?
I think so. Even back then, if the only club in your bag was to be a tyrant, I don’t think you could be an effective manager. That may have been one of the clubs you might have to use. You can be successful with fear for short periods of time. But not for long periods of time. Today there is no way it’s going to work. I have two Gen Y sons. There’s no way they’d put up with a tyrant as a boss. They’d find somewhere else to work. You’re not going to motivate people that way. Even back in the day, if you were very dictatorial in your management style, you got exactly what someone asked you to do. Not less, but not more. Today if people really understand why they’re doing something, I think they give more.

Life of a CEO

What’s one thing that keeps you up at night?
Today it’s the price of oil, for a lot of different reasons. Obviously it’s difficult for us to forecast demand – on trucks and SUVs especially – not knowing exactly where it’s going to fall out. But probably the more difficult part about that is it may mask trends in the marketplace that we can’t see because of it.

Today is an example. The biggest segment in the marketplace for years and years has been midsize passenger cars. Now because of the tremendous growth of small SUVs, small SUVs are. So what’s causing that? Is it the price of gas? Some might think that. But when you look at small SUVs and midsize cars, the vehicles are about the same size today. They’re about the same price. They actually get about the same mileage. They have the same creature comforts. So today we’ve got to figure out for the future, when gas normalizes, are people going to move back to passenger cars or are they going to stay in small SUVs? So that concerns me a little bit, trying to figure that out.

Is your life Toyota 24/7 all the time, or do you ever get away? Tonight when you go home for dinner, are you going to be able to stop thinking about Toyota?
No, because I have three conference calls. My life can sometimes be 48/7. This week is an example. Tuesday I had an officer’s meeting in Japan. But I had to be in Des Moines, Iowa, Tuesday night for a reception and a dinner. So I spend the day in Japan, fly all night, get there the same day that I left, do my reception dinner, speak to 800 attendees the next morning at a fundraiser for the Boy Scouts and Girl Scouts of Iowa, fly back home, have three conference calls until 1 a.m. with Japan. And then today, I’m here and I’ll go home and have two more conference calls.

I sleep five hours a night. It’s kind of the nature of the beast.

How do you feel about all the travel, the demands of it?
It was at one point a lot of fun. I love traveling. I like seeing new places and meeting new people. But last year I was gone 180 nights – my wife keeps track, so every January I get my report card. I wouldn’t change it for the world, but I can tell you being a CEO with all the time constraints, and now being in charge of manufacturing as well, it’s a tough grind. And frankly, the only way to keep your sanity is to have a strong partner at home. My wife, Barbara, she is an unpaid employee of this company. She is a great host, whether it’s dealers or guests who come in from Japan. It’s a lot of work. Spouses are the real unsung heroes of CEOs.

What do you love about your job?
I love thinking about the future. I am one step or two steps removed now from day to day operations. And I miss that, but at the same time it allows me to think about where we should be four to five years from now. Obviously the idea of One Toyota is part of that. The idea of realigning all of our manufacturing plants is part of that. And I think part of it too is watching people develop and progress in the company, knowing that’s the bench of the future leaders, so that we continue with this company that develops people from within. That we don’t have to go outside necessarily. To me, that’s fun.

What do you think? What stands out to you from the interview?