Few accessories set off a pickup truck quite like tinted windows – especially if you live in a hot climate. Tinting the windows of your Toyota Tundra can be one of the most cost effective truck modifications you will ever make, and not just from an aesthetic perspective. Tinted windows can keep the Sun out of your truck’s passenger compartment and combat the “greenhouse effect” that can raise inside temperatures, and they’re also great for boosting vehicle privacy.

How exactly are windows tinted? There are two basic approaches to the process. The cheapest is to use do-it-yourself window tinting film, which is designed to either use static cling to affix itself to your windows or is meant to be applied with a soapy solution in order to form a bond against the glass. With a lot of hard work chasing out air bubbles and cutting the film so that it is the proper size, passable results can usually be obtained for at least the first few weeks. However, this type of tint tends to mark up easily, a fact which is only made worse by the rolling up and down of windows. After a few months, the typical do-it-yourself tint will look tattered, torn, and faded (usually turning a slight purple color). 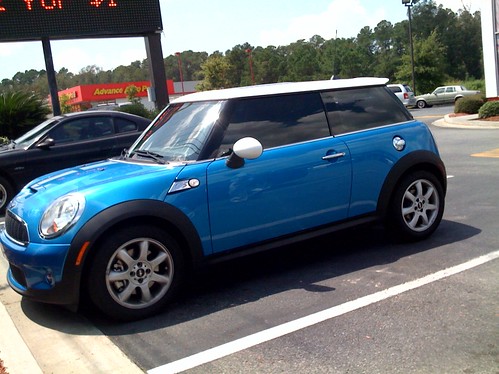 A far better option is to visit a local and reputable window tint shop. Call your local new car dealership and ask the new vehicle manager who they recommend locally. Dealerships usually have some really inexpensive vendors for window tint that do top quality work. For a six-pack of beer, you might even be able to get the dealership to give you the “shop rate.”

The key to window tinting is simple: pay for professional work. The care and skill with which a professional can tint your windows is well worth paying for given the tedium and difficulty of applying your own home tint, not to mention the invariable streaking and bubbles that most first-time installers suffer from. There’s also the fact that window tint is VERY difficult to remove once it’s been installed. If you mess up and have to re-do a window or two, you’ll wish you had skipped the entire process and paid for a professional.

When choosing which type of tint to get, there are four things to keep in mind: film quality, the “look” you’re going for, visibility (a.k.a. light transmittance), and your locality’s window tinting laws.

Quality: Quality window tints are often a hybrid film that incorporates both metallic flake and dye. Dye-only films are the least expensive option and they’re great for absorbing heat, but there low reflectivity ultimately results in gradual fading (over a period of years). Metallic films can give a mirror-like finish, but that’s not a very popular option in vehicle tints. Not only is a mirror-like tint often illegal, it’s also not very good at  keeping the interior cool. The best films are a mix of metallic and dye layers, and usually these top quality films have a metallic layer created by a sputtering process (as opposed to a deposited metallic process). 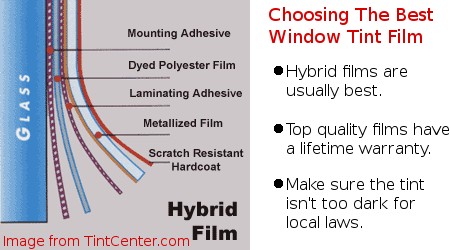 Of course, color has a lot to do with film selection too. Some colors and darkness levels simply aren’t available in metallic or metallic hybrid films. The long and short of it – ask about the warranty on the film. 5 years is the minimum warranty you should expect, and most top quality films come with a lifetime warranty.

Appearance: In terms of appearance, you should choose whether you are looking for a black, grey, or mirrored tint. There are also different colored tints out there such as green, blue, or orange that can sometimes be matched to your truck’s paint job. The color or how dark the tint looks is often tied into how much light it allows to pass through. Since the glass in your Tundra already reflects 5% of the visible light which hits it, keep in mind that you need to add that to whatever tint level you are considering.

Visibility and Legal Considerations: Tints are rated in terms of VLT%, which stands for visible light transmittance percentage. You’ll need to make sure that enough light will pass through in order for you to see at dawn, dusk and at night, and you also need to make sure that you aren’t breaking local laws. Generally speaking, at least 30% of outside light has to make it through any piece of glass, so don’t choose a tint with a VLT of more than 65 for any of the windows in your vehicle if you want to stay on the up-and-up.

It’s important to keep in mind that your state might also limit where you can put the tint – some do not allow front windows or windshields to be tinted – and you may even be forbidden from installing colored or mirrored tints due to increased reflections that could affect other drivers.

NOTE: If you’re really interested in a tint that’s darker than legally allowed, many installers will help you out so long as you pay cash and don’t expect a receipt. While we don’t recommend this practice, it can be done.

Cost: Window tinting can cost as little as $99 for a regular cab pickup and a cheap film, and as much as $500 for a large SUV with a lifetime warranty. However, most tint jobs fall in the $200-$300 range. Keep in mind that labor is the biggest part of the cost (unless you’re purchasing a particularly exotic film), so there’s really no reason to go cheap on the tint material itself. Get the best warranty you can in the color you want.

Do you have any other tips or questions? Feel free to leave a comment below.