My Other Truck is a Thule Roof Top Cargo Carrier

If you have a car that you want to use to haul some “stuff,” this article is for you.

There was once a time when car owners who wanted to haul anything would have to borrow or rent a pickup truck. Cross-country moves and/or extended vacations would often entail renting a truck in order to handle all of the “stuff.” Naturally, the Swedish (a crafty and clever people) invented a way to avoid all this extra expense and inconvenience. 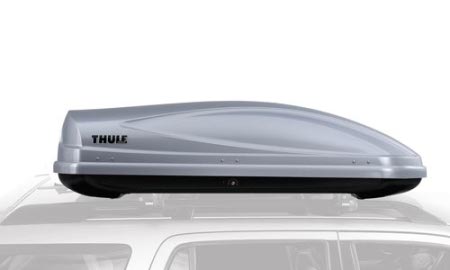 Thule cargo box kind of like a truck for car owners.

Thule, a company once known exclusively for their ski and snowboard racks, is at the forefront of extending the cargo capacity of the average automobile. How do they do it? The answer is through their line of cargo boxes, such as the Atlantis, the Spirit and the Boxter, are meant to attach to the roof of almost any car, big or small, and provide an extra dollop of cargo storage that is waterproof, windproof, and stable enough for extended trips. They”re kind of like trucks for car owners…except they can”t tow or haul more than a few hundred pounds and they don”t do off-road.

You take what you can get though, right?

Roof-top cargo carriers were once too bulky in design to fit onto the sloping and rounded roofs of modern vehicles. Thule ended up designing carriers that gripped onto standard roof racks or after market roof racks thanks to their QuickGrip clamp technology. Even small hatchbacks such as those produced by Toyota and Volkswagen can have boxes attached to their racks, which can add anywhere from 11 cubic feet of cargo storage to an impressive 21 cubic feet of storage – the equivalent of adding a mid-size car’s trunk to the roof.

The newer Thule boxes are designed to have as low a profile as possible in order to reduce their height clearance as well as their impact on a vehicle’s fuel mileage. A number of other advances have been made as well, such as a locking system that will not release the key until the box has been completely secure and dual access that enables the box to be opened from either side. Some boxes are small enough to be mounted side by side on larger vehicles like SUV’s or full-size wagons, while others can accommodate skis and other outdoor equipment in order to keep them protected and safe even when the vehicle is unaccompanied.

Thule’s racks are available in two basic colors – black and silver – and they all come with a lifetime warranty, meaning that if the carrier is ever cracked by road debris, falling snow or ice or even damaged during a theft attempt, the company will replace it. The versatility of these cargo carriers, combined with their reasonable purchase price (starting at as little as $200) and excellent reputation have helped many non-truck owners haul all their stuff.

So, if you or someone you know has a car that needs a little more cargo capacity, check out a Thule cargo box.