It is certainly not unusual for companies to produce movie tie-in products in order to help promote a film. Not only is it good marketing to movie fans, but it also capitalizes on the hype that surrounds the movie. What is a bit out of the ordinary is for a car company to make a special edition vehicle for a movie that isn’t about cars whatsoever. The logic behind automobile placements in car movies – such as the “Smokey and the Bandit edition Pontiac Trans Am – is fairly clear, but it takes a real movie buff to spot the connection between the 2003 Terminator 3 Tundra and an unstoppable cyborg. 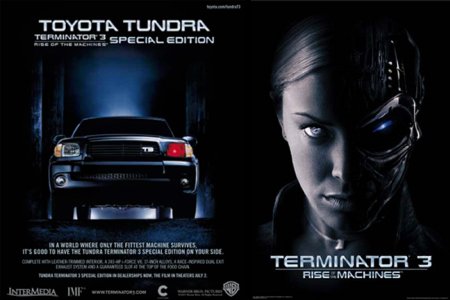 Ready for the connection? The Tundra pickup truck was featured in a rather lengthy and spectacular car chase in Terminator 3 involving Arnold Schwarzenegger’s killer robot from the future and the Terminator X. While most of the eyes in the theater were probably on the action itself (and/or the TerminatriX), the truck driven by the escaping main characters was a Tundra (buried underneath a homemade cargo box and covered with ten different layers of dust and dirt).

The Tundra takes a real beating during the scene, yet it still manages to whisk the movie’s heroes to safety. The message: Toyota’s dedication to quality and toughness is good enough for “da tear-men-8-tor.”

In real life, Toyota produced a Terminator 3 Tundra as a special option package. It was available only in a monochromatic black paint job, with no chrome or stainless steel allowed. A special grille bearing a T3 identifier also helped to set the vehicle apart from other Tundras, as did T3 decals and unique rims. Inside the truck, metal accents replaced the standard Toyota trappings.

In terms of performance, the 2003 Toyota Tundra Terminator 3 Special Edition featured only subtle changes. The only real modification made to the drive train was the addition of a TRD dual exhaust system, which might not have added much grunt (about 10 horsepower and 10 lb-ft of torque) but it certainly did sweeten the soundtrack to this V8-powered pickup.

Not many of these T3 Tundras were built, and as a result they are a rare sight on America’s roads. The film itself was not a huge success (at least not by Hollywood standards), which caused the T3 Tundra to fade into obscurity as soon as the movie left theaters. Most people who encounter this special edition Tundra merely assume that its all-black motif and sticker package are the result of personal customization, not the product of Toyota’s marketing department. This makes the T3 Tundra one of the more interesting and possibly collectible movie vehicles built in the past few years.

While it might not have the star power of a mustache-twirling Burt Reynolds at the wheel (and the surprisingly unattractive Sally Fields riding shotgun), it does have scarcity on its side, and in a few decades it could achieve the same type of cult status the original Terminator film has enjoyed in the years since its release.

That is, unless the machines take over and destroy mankind. Keep your fingers crossed.