Following-up on news that 80% of NUMMI’s workers are upset with the UAW, a NUMMI employee has sent us some information about a meeting that took place on Sunday, January 24th between NUMMI employees and UAW Local 2244 leaders. Evidently, the UAW’s local bargaining chairman Javier Contreras (the guy who is supposed to be negotiating for a worker’s severance package) dropped a sling of F-bombs on a crowd of 400+ NUMMI workers.

Here’s the video (not for kid’s ears or something you want to watch at work without headphones):

You’ll hear the meeting explode at the 31 second mark.

That’s right folks – the guy who is negotiating directly with GM and Toyota can’t control his temper. Incredibly, UAW Local President Sergio Santos claims that this scene was caused by workers “planted” by NUMMI’s management:

Union president Sergio Santos said his staff called police in response to what he called deliberate interruptions led by a few individuals who, he said, were not workers but “two or three plants” placed there by NUMMI management.

Seriously?! The reason that the UAW leader lost his temper is because of so-called NUMMI management “plants“?! Allegations of management interfering with union meetings seem plausible, but the videos above and below clearly show a man who has lost his temper. Unless NUMMI management has been secretly injecting Javier Contreras with steroids (thus fueling his ‘roid rage), it seems safe to say this blow-up can’t be blamed on someone else.

The San Francisco Chronicle quotes a NUMMI worker who is upset that the UAW is focusing on a political battle with Toyota when instead they should be working on a severance package from both Toyota and General Motors. UAW leaders, however, “consider it is pointless to go after the bankrupt GM.” Unfortunately, this still doesn’t explain why the UAW picketed Toyota at the San Jose auto show.

The facts seem to indicate that the UAW is trying to turn up the political “heat” on Toyota in hopes that it will result in some sort of major concession. Unfortunately, this strategy carries great risk for NUMMI’s workers. If the UAW simply met with Toyota at the bargaining table and negotiated in good faith, they might be able to secure a fair package with a lot fewer theatrics.

Here’s another video of the same meeting shot from the front of the hall for anyone who’s curious. Again, this isn’t for kid’s ears and isn’t safe for work (lots of cursing from UAW leaders). 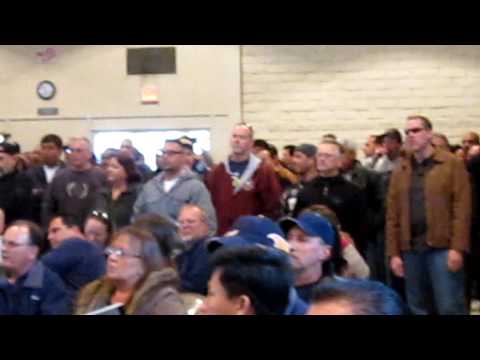 Comments? If you were at the meeting, please share your viewpoint and/or experience below.