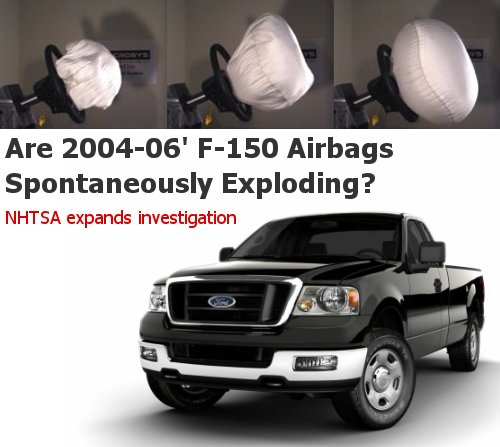 As part of their decision to expand the investigation into the F150, NHTSA has released documents showing that a little more than 1.5 million F150’s made between 2004 and 2006 could have this problem. According to the Automotive News, Ford’s internal investigations indicate these spontaneous airbag explosions are the result of an electrical short in the steering wheel. More than 300 complaints about this problem have been registered with NHTSA, and fortunately, none of those complaints have been linked to  a serious injury (mostly cuts and bruises).

Still, it’s easy to imagine a scenario where the spontaneous explosion on an airbag could cause a serious problem. Even if the exploding airbag itself didn’t cause an injury, the shock of a spontaneous airbag detonation could cause someone driving an F150 to lose control.

In light of Toyota’s recent recall problems, Ford would be wise to get ahead of this thing as quickly as possible. While incidents of unintended acceleration are quite rare (and most of them resulted in no injuries), Toyota’s reputation has likely taken a hit with consumers. The F150 is Ford’s most popular vehicle, and they can ill-afford to have consumers question the truck’s safety.

Based on NHTSA’s decision to expand the investigation, the documents they’ve released, and Ford’s statements, it seems likely that an F150 airbag recall is coming. Hopefully, Ford will manage this issue better than Toyota managed both the floor mat recall and last weeks accelerator mechanism recall.