It might not be the most flattering endorsement of a Toyota product, but here it is: a New York Times article features an image of riot police rolling down the street in armored blue Toyota Tundras. 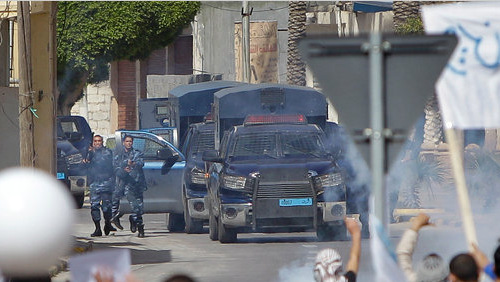 Where Tundras Are Sold 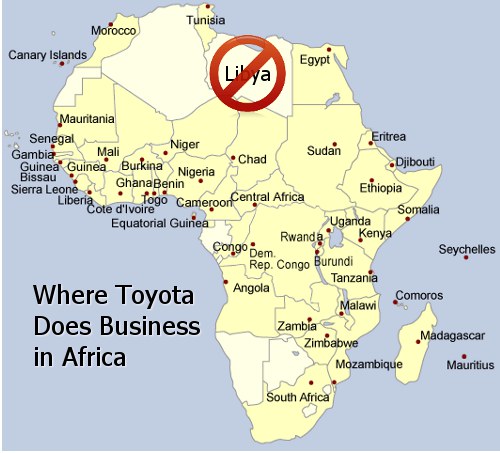 Toyota is very popular on the African content, but they don't sell vehicles in Libya

We also found some brand new “gray market” Tundras being sold on a United Arab Emirates classifieds site. Since Toyota doesn’t officially export the Tundra to the U.A.E., this is almost certainly a Tundra that was sold in the USA and then exported. The UAE has numerous tariff-free trade zones that allow goods to enter and exit the country with ease, so it’s entirely possible that Libya’s trucks came from a US police upfitter.

According to one Toyota fleet manager here in the USA we spoke to:

It’s a good bet those Libyan trucks came from Mexico or somewhere in South America. It’s hard to tell [from the picture] but it looks like those trucks were all part of the same order. Some foriegn upfitter must have done them up and then shipped them off to Libya. It would be very, very risky for a U.S. company to try this sort of thing. Toyota would frown upon this business decision and might not work with that particular upfitter any longer.

An “upfitter” is a company that specializes in commercial upgrades/enhancements to otherwise factory trucks. Police and emergency vehicle upfitters are the companies that take a stock vehicle off a dealer’s lot and turn it into a fire truck, police truck, etc. Most of them work exclusively with local governments in the USA, but a handful also deal in exports.

According to our fleet manager (and he’s been doing Toyota fleet a long time), it’s unlikely that these Libyan trucks came from a US dealership and/or upfitter. Even though the USA lifted most sanctions on Libya a few years ago – and there would be nothing illegal about selling Tundras to Libya – Toyota frowns upon the practice.

However, there’s no way to be sure as to where the Tundras in the pictures above came from. If you know anything about where these trucks could have been upfitted please comment below.

Thanks to PickupTrucks.com for pointing this out.