NHTSA is still working to release test data – we will update this table as more info becomes available.
* – Both RWD and 4WD/AWD models were tested and the scores were averaged
(!) – NHTSA has issued a “safety concern” along with this rating

Here’s some more info on the Tundra’s crash test ratings, some crash test videos, and more info about the safety concerns that NHTSA has about the Ram 1500.

When compared to similar cabs from Chevy-GMC, the Tundra has the same overall crash test ratings (only rollover tests are better for the GM trucks). However, when you compare the NHTSA crash tests to crash tests conducted by the IIHS (Insurance Institute for Highway Safety), you see that the GM trucks did much better in the government tests than they did in the IIHS non-profit tests. 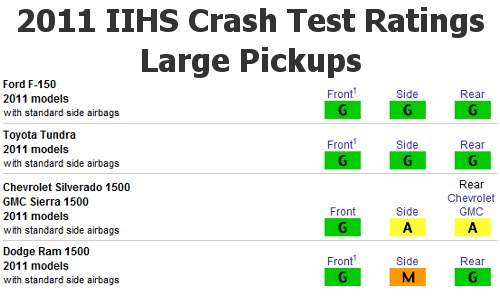 While there is always going to be a discrepancy between tests, the average result from the IIHS and NHTSA tests shows that the Tundra is the overall winner because it ties the NHTSA test ratings with Chevy-GMC but rates much higher in the IIHS tests.

The Ram 1500 seems to be in a bit of trouble as far as safety is concerned. The IIHS has issued a “marginal” rating for the Ram in side impact tests, while NHTSA has a “safety concern” to go along with the Ram’s 3 star side impact tests. According to the NHTSA website, the Ram 1500 failed the pole intrusion side-impact test creating a “higher likelihood of thoracic injury.”

To be clear, the Ram scored 5 stars in the standard “barrier” side impact test, and even a 3 star rating is a solid showing all things considered (the standards are brand new this year and designers haven’t had a chance to design for them).

Finally, the 2011 F150 performs slightly worse than both the Tundra and GM trucks, earning only 3 stars in frontal crash test ratings rather than the four stars earned by GM and Toyota. This is a dissapointing result for Ford, but considering their strong performance in IIHS safety tests, Ford owners and buyers can rest assured their truck is safe overall.

Finally, we have some great footage from the NHTSA crash tests that shows just how tremendous these trucks have become in terms of safety. Watch the side impact crash videos especially, and keep in mind that despite all the damage the Tundra still got a 5 star rating…this is what a good crash looks like folks. 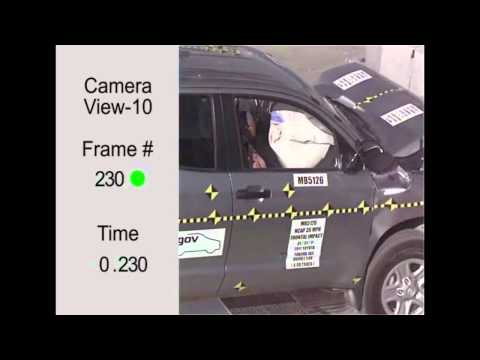 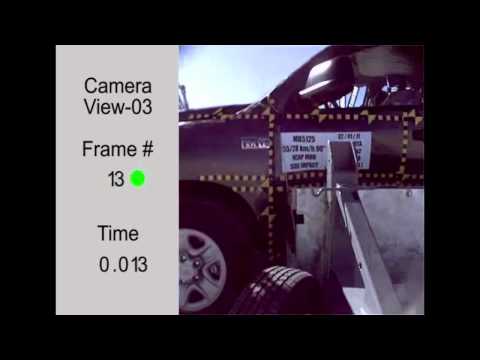