Everything we’re seeing in the latest-generation Prius and EV Rav4 is on the table for the hybrid Tundra, including:

While this is pure speculation, clear polycarbonate panels with integrated solar cells could be used inside a truck bed, as they would be strong enough for daily use while also generating power.

If, for example, you parked a 6.5′ foot truck bed in the sun and lined it with approximately 25 square feet of solar panels, you could generate 1kw of juice each day (assuming 10 watts per square foot and about 4 hours of useful sunlight). 1kw isn’t much, but considering that the latest Prius has a battery capacity of 1.3kw, 1kw of “free” power each in a Tundra hybrid might be good for a 10%-20% boost in fuel efficiency.

What’s more, if the panels were placed between ribs in the bed (like the old wood-panel beds that were used once upon a time), they wouldn’t really bear most of the weight in the bed, and wouldn’t be scratched much either. 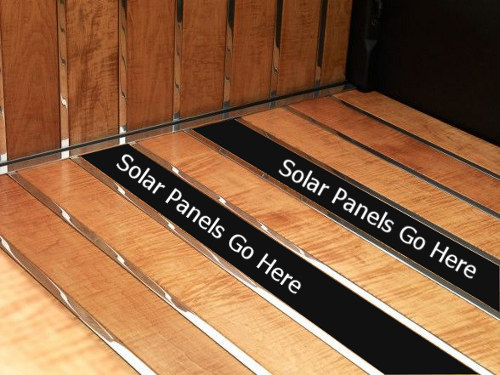 If lexan-covered solar panels were placed between steel ribs, they wouldn’t have to support much weight and likely wouldn’t be scratched very often. There are industrial-strength scratch-resistant coatings available for Lexan as well.

In terms of cost, it seems likely this system could be integrated into a truck for $2500 or so (figuring $100 per square foot for Lexan covered photo cells, which is 25% higher than current pricing to account for other expenses).

While $2500 is a LOT to pay for 1kw of juice per day, it might be worth a big bump in a vehicle’s fuel economy rating. If that bump in fuel economy rating is enough to help Ford or Toyota qualify for a CAFE credit, it could save them millions in penalties, which in turn would make this system cost-effective.

What’s more, it would be a very cool “green” feature that would give the Tundra hybrid some credibility with the greenies.