As far-fetched as it may sound, gasoline prices may have peaked (or may be peaking soon).

Demand For Gasoline In The USA Has Almost Certainly Peaked

Americans are burning less gasoline (and diesel) now than they did in 2007. Even projections for 2014 and 2015 – which are based on continued economic growth – show gasoline consumption isn’t going to increase (see eia.gov). While the sudden decline in gasoline use in 2008 was almost certainly a result of economic contraction, it’s not the only factor at play here. 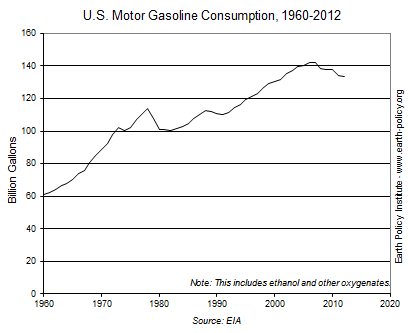 The fact is, vehicles are more fuel efficient now than ever before, mostly as a result of federal fuel economy regulations. 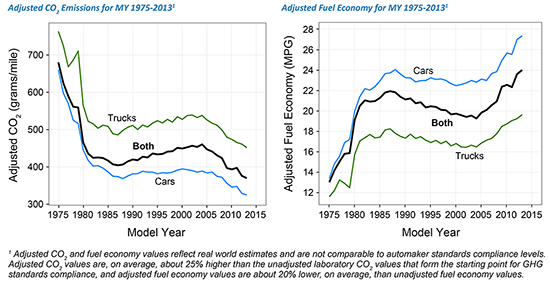 The average vehicle in the US is considerably more fuel efficient now than ever before. Image via WashingtonPost.com

In addition to regulations, gasoline demand is falling because consumers have bought more fuel efficient vehicles over the last few years. Automakers have made fuel saving technologies like direct injection, transmissions with more gears, and hybrids more affordable. A declining interest in driving among America’s youth has decreased demand for gasoline as well.

Still, regulations have played a big role in making the average vehicle more fuel efficient…and those regulations are about to get a whole lot tougher.

If we look into our crystal ball, it seems likely that gasoline demand will continue to fall. Consider:

When you add it all up, it’s very likely that the USA will never burn more gasoline than it did in 2007.

What About Global Gasoline Demand?

It’s all but certain that gasoline demand in the USA is going to decrease annually. The trouble is, the USA isn’t the only country burning gasoline. There are billions of people in the world that don’t own cars, and many of them are going to buy cars very soon.

However, according to Exxon-Mobil’s 2014 Energy Outlook report, global demand for gasoline isn’t going to grow much longer:

[This decrease in consumer demand for gasoline after 2020] won’t be because of fewer vehicles in the world. In fact, from 2010 to 2040, the number of light-duty vehicles…is expected to more than double. [However,] the increase in the number of light-duty vehicles in the world through 2040 will likely be nearly offset by the fact that the vehicles themselves will be far more fuel efficient.

Does A 25% Increase in Oil Demand Mean Higher Gas Prices?

Of course, consumers aren’t the only ones burning petroleum. From air travel to cargo ships to industrial processes, Exxon-Mobil anticipates global demand for petroleum will increase about 25% by 2040. Which means that even if gasoline demand falls, petroleum demand will increase. But does an increase in petroleum demand lead to higher gas prices?

If you look at the volatility of oil pricing over the last 60 years or so, you see multiple dramatic price swings: 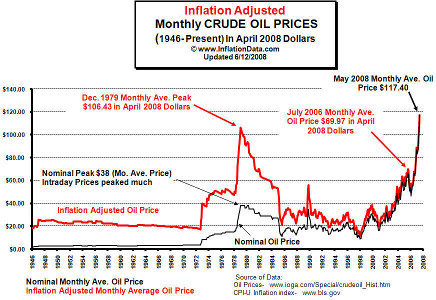 Crude oil prices from 1946 to 2008, inflation adjusted. What this chart doesn’t show is a dramatic drop off in oil prices in 2008 and 2009 that still hasn’t recovered to 2007 levels. Image via SeekingAlpha.com. Click for a larger view.

For 25 years after World War II, oil pricing was stable, even though demand was increasing dramatically. Then we had an energy crisis and a 15 year period of high prices…and then oil prices went back down to about what they were before (inflation adjusted). This price increase and decrease was a result of a few things, including:

Oil prices went from “sky high” to about what they were in the 50’s and 60’s (inflation adjusted), and they stayed at this lower price for nearly 15 years.

Granted, this is just one example of an oil boom and bust…but it’s a very relevant example, as we’re currently sitting in a similar situation in 2014. After a period of high prices, oil production is increasing daily. If global consumers can find a way to reduce their use of oil in a relatively sudden and dramatic fashion (perhaps by driving electric cars), we could see a repeat of the oil collapse in the 1980’s.

Or maybe not. Perhaps oil prices will increase with demand, and history won’t repeat itself. Who knows?

What Does All This Mean For The Truck Market?

If you own a truck, all of this information probably means that your gasoline bills probably aren’t going up (at least not much), and might potentially go way down.

What’s more, it means that truck manufacturers have a reason to be bullish about the truck market. It’s no coincidence that GM has brought back the compact truck, that Nissan is making a big investment in the next generation Titan and Frontier, that Ford is building an aluminum truck, and that Toyota and GM will both being making mid-cycle engine updates that may include a diesel. These manufacturers know that increased fuel economy is going to lead to lower fuel costs, and that’s going to boost interest in buying and driving a truck.

One of my favorite saying is that “predictions are hard – especially about the future.” Still, when you add it all up, there’s reason to wonder if we’ve seen the highest gasoline costs we’re ever going to see.