Gas Prices and Truck Sales – Not As Related As We Think

Auto analysts LOVE to declare that high gas prices will ultimately kill pickup truck sales. At first glance, this reasoning makes some sense – if gas is $5 per gallon and a Tundra has a 26 gallon fuel tank, every fill-up will cost $130. If you just felt a little pain in your gut at that number, you’re not alone. When gas prices approached $5 per gallon this time last year, truck sales fell precipitously.

However, was this a knee-jerk reaction or an indicator of a shift in consumer demand?

What about economics? Won’t gas prices impact sales simply because of the expense?

Let’s say a consumer is choosing between a new Tundra 5.7 and a new Tacoma 4.0. The Tundra, for sake of argument, averages 15mpg. The Tacoma averages 18mpg. According to FuelEconomy.gov, the difference in annual fuel costs between the Tacoma and the Tundra is only $406 – about $34 a month. This is assuming a fuel cost of $1.81 per gallon. Triple the price of gas ($5.40 per gallon), and the cost difference is about $100.

While we’ve never conducted a scientific poll, we’re pretty confident most Tundra owners would spend an extra $100 a month on fuel if it meant having a Tundra 5.7 with twice the capability of a 4.0 Tacoma.

Let’s also consider that many people own pickups as a second or third vehicle. If gas prices increase, will consumers stop buying trucks, or will they simply drive their trucks less?

Let’s also recognize that a person who can afford a new Tundra is probably able to afford a higher than average gas bill. A new Tundra costs $25-$40k dollars, before taxes, interest, and registration fees. If an extra $200 or $300 in fuel costs will “break the budget” compared to buying a new Corolla for $17k, you’re probably not in the market for a big pickup. 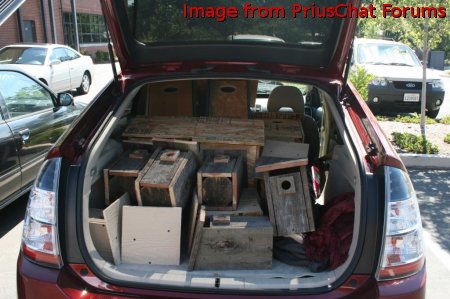 The Toyota Prius isn't much of a work truck.

Finally, and perhaps most importantly, there’s also the fact that many consumers NEED trucks. If your work requires a truck, if you have a big boat or RV, or if you like to go off-road, you’re not going to be able to buy a new Prius when gas is $5 per gallon – at least not until they make ladder racks and tool boxes for compacts.

Comments? Would you buy another Tundra if gas was $5 per gallon?