For years, Ford has been known for building engines with spark plugs that snap off. With several class action lawsuits related to the problem still in court, no resolution on the horizon and new metals and mixed-metals being used in building trucks, will this issue spread to other trucks due too? 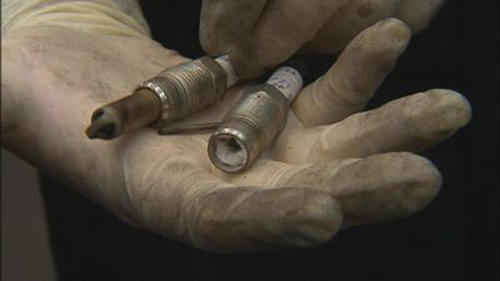 This is a common sight to Ford Triton owners. Could we all be facing issues like this?

Not aware of this issue, go ahead and type “ford spark plug class action” into Google, Bing or Yahoo. You will find several news stories and law offices dealing with class action lawsuits that have been filed over the years. The claim goes like this: Ford sold or leased F-150s, Mustangs, Explorers and other vehicles including the Triton V-8 engine with knowing that the spark plugs could snap due to engine design and/or materials. The truth is that Ford did anticipate this to some degree and actually produced a tool for dealers to address this when it happens.

Here is the statement from one class action suit:

“In fact, even after Ford developed a special tool and procedure to remove the defective plugs, and after a replacement spark plug was developed, Ford continued to manufacture, sell, and lease the Covered Vehicles with the defects,” the class action lawsuit continues. “As a result of Ford’s knowing and intentional conduct, Plaintiff and Class Members have been required to spend hundreds, and in many instances, thousands of dollars more than reasonably could be anticipated to replace spark plugs — something that generally costs around $150.”

The way we understand it, the class action suits are being merged and are still in court. However, after a year of litigation (the above was filed in January, 2012), maybe they will finally settle like Toyota was forced to over the unfounded acceleration issue.

What’s the Deal?
The problem boils down to the mixing of different metals. To the point, “The dissimilar metals of the spark plug and the cylinder head coupled with a long service life just about welds the plug into place,” according to YouFixCars.com. “To make matters worse carbon develops on the plugs where it sticks into the combustion chamber again making it harder to remove without breaking.”

Nowadays, most everyone is aware of the issue with the Triton V-8 engine AND they have bought the special removal tool from either Lisle or Cal Van. With this tool and a whole lot of experience, you can probably get all the spark plugs out without an issue. Note, probably not 100% for sure.

The sad part is that it is STILL an issue. Some Ford websites say the issue started way back in the late 90’s – almost 15+ years ago. It seems rather interesting that a permanent solution hasn’t been devised.

The real scary part for all future trucks owners is that the new weight-saving strategies of truck makers are thought to include the use new metals or combinations of existing metals. Without years of proven track records, these new metals have the potential of having unintended consequences like the Triton V-8. It does make you wonder if this problem or a new problem will impact trucks in the future. This is especially true of new vehicles that don’t require maintenance as often and with parts lasting longer. To be blunt, it will simply take a longer period of time before these issues present themselves. That could be bad news for all of us.

Will a class action suit force Ford to address this issue? Will other trucks have issues with mixed metals? What do you think?