When the Ford F-150 Atlas concept showed off its electronically controlled active wheel shutters, we knew it wasn’t going to be cheap or durable. However, there is a new alternative that shows just as much fuel saving promise – eVOLVE™ Hybrid Wheels. 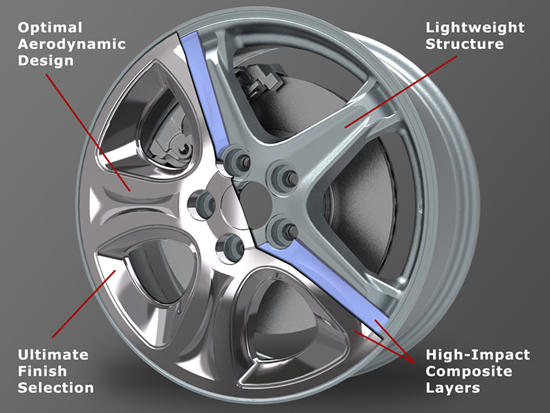 Will these futuristic wheels replace all stock manufacture wheels?

The wheel from Lacks Wheel Trim Systems (LWTS) is “designed to be a lower-cost alternative to the eVOLVE™ Hybrid Wheels – Another Futuristic Gas Saving Technology,” according to SAE.org. They have already made a debut at both the Los Angeles and Detroit auto shows on a 2012 Ford Focus. Track and EPA five-cycle testing have showed a highway fuel-economy improvement of 1.1 mpg and .04 city.

In a nut shell, there’s a very basic aluminum wheel with a composite cover attached. The basic wheel is light, and the cover is aerodynamic, so the system boost fuel economy about 3% on the highway, 1% in the city. That’s not much, but on a Tundra averaging 16mpg, that’s almost a 1mpg improvement.

LWTS is billing these tires as an “attractive, highly engineered composite wheels that decrease weight and optimize aerodynamics for increased vehicle MPGs.” This statement has a couple of interesting points: 1. As stated in the SAE article, engineers can build a tire that maximizes MPG, however, they are, well, ugly. 2. The statement comes with the standard disclaimer that MPGs are based on personal driving habits and other factors. This shouldn’t be news to anybody. 3. LWTS says that when you upgrade to their wheels you immediately upgrade BOTH your vehicle’s style and MPGs. Quite a sales pitch. 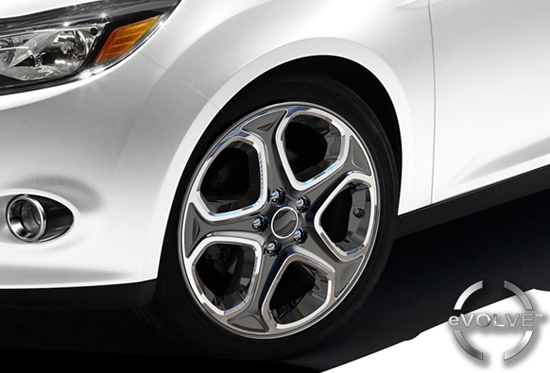 The eVolve wheels mounted on tires.

The truth is that the wheels weigh 19.20 lbs and a typical production wheel weighs 23.7 lbs. This savings of about 4 lbs per tire adds up. Plus, the composite cover is designed to be more aerodynamic. It has been tested at the AeroDyn wind tunnel in Moorsetown, NC where NASCAR cars are tested. It was also tested by Roush Engineering at FT Techno’s Fowlerville, MI proving grounds. Lastly, it was tested and meet both SAE J328 for radial and rotary fatigue using the GAWR (gross axle weight rating) for North America, also to SAE J175 (curb impact), according to SAE.org. All the testing concluded, it works.

The best part? These wheels are less costly than regular old aluminum rims. This might be one of the many ways that Toyota reduces fuel use on new trucks. LWTS told SAE that they expect “the aero wheel is intended to be an OE product, perhaps used on specific trim levels, not a retrofit,” said James Ardern, LWTS Director of Business Development.

Plus, it’s far better than Ford’s complex louver system on the Atlas Concept.

What do you think of these wheels?