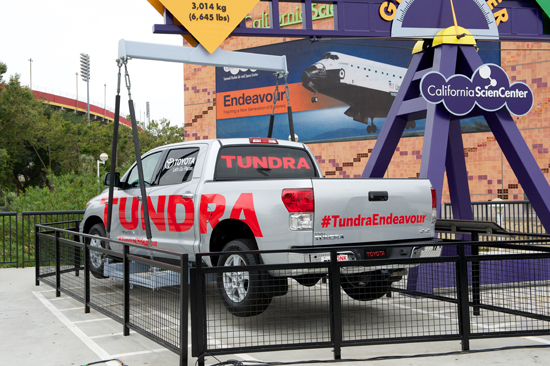 A new display at the California Science Center has THE Toyota Tundra (yep, the one that towed the shuttle Endeavour) hooked up to a “Giant Lever Exhibit.” The outdoor exhibit shows the power of levers and also celebrates the Tundra’s towing power.

Also, at the unveiling on May 31, 2013 were a collection of astronauts who flew in the Endeavour, future astronauts and a fat check of $401,300 for the center. Toyota organized a tweet drive to raise the money for the donation.

The future astronauts showed off the display by using the giant lever to raise the Tundra. Toyota said in a press release that “Five year-old ‘future astronauts’ Noah Lara and Samantha Comiskey, dressed in orange jumpsuits, demonstrated the science behind the Giant Lever Exhibit.  A lever consists of a rigid beam pivoting on a fulcrum.  By standing further away from the fulcrum, the two applied less force and were able to lift the Tundra full-size pickup truck.”