OffRoadWeb.com has a nice quick article that shows how installing an MBRP cat-back exhaust system takes just about 30 minutes (27, to be exact). While this install time assumes that:

it’s still a great illustration of just how easy it can be to install a cat-back after-market exhaust system on your Tundra. Most cat-back exhaust systems are designed to use factory exhaust hangers, which means that install can be really, really simple…especially on a newer truck where there isn’t any rust or grime to deal with. 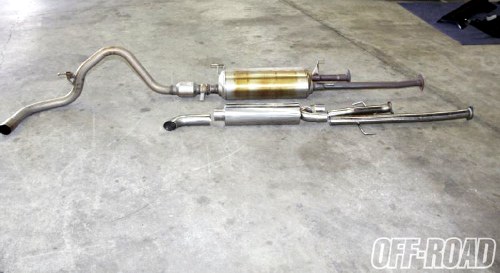 If you’re thinking about adding a cat-back exhaust system to your Tundra, here are a few ideas to consider:

More Signals That Ram Will Bring Out 1500 Diesel

Since TundraHeadquarters.com was founded way back in March 2007, we’ve been pining for a diesel Tundra. Anyone who has driven one of the big diesel trucks from Ford, GM, or Chrysler-Fiat will testify to the power, performance, and efficiency of the modern turbo-diesel. I’ll go a step further and say that – disregarding cost – a diesel is the best pickup truck engine option for a hauling or towing.

The trouble is, I have to qualify my statement by saying “disregarding cost,” and that just doesn’t reflect reality. Despite their performance benefits, no automaker has offered a diesel engine in a light-duty truck in recent memory. The general reason is cost, or more specifically, emissions. US vehicle emissions rules are strict, which means US diesel engines need a lot of emissions controls, which means they’re expensive….which means the rest of world enjoys torquey little high-mileage diesels while we don’t.

However, recent comments from Chrysler-Fiat CEO Sergio Marchionne – combined with some interesting rumors about a Ram 1500 diesel we reported back in December 2010 – indicate that Ram might be the first company to offer a diesel in a light-duty pickup.

Toyota Recalling 51k Tundras To Fix 25 Of Them

In news that is sure to get the ‘haters’ all fired up, today Toyota has announced a recall of almost all 2011 Tundras because of a potential driveshaft casting defect in 0.05% of all trucks sold during the model year.

[Toyota will conduct] a voluntary safety recall on approximately 51,000, 2011 model year Tundra trucks to inspect the rear drive shaft. The rear drive shaft in an estimated 0.05 percent of the vehicles may include a component (slip yoke) that could break due to improper casting during the foundry process. Toyota is aware of one drive shaft slip yoke failure in a customer-owned vehicle. There are no reports of accidents or injuries associated with this condition. No other Lexus or Toyota vehicles are involved in this recall

Yes, you read that correctly. 0.05% of 51k 2011 Tundras may have a defective driveshaft…if you’re doing the math on that one, the answer is Toyota is worried about 25 trucks.

Toyota is going to recall an entire year’s worth of trucks just to find 25 of them that may have a defect. Crazy, no?

What makes this recall even more amazing is that Ford hesitated to recall 1.5 million F-150’s with malfunctioning airbags not even two months ago, even after NHTSA asked them to do a recall!

Do Auto Execs Make Too Much Money?

When Ford CEO Alan Mulally was granted $56 million in stock bonuses about a month ago, UAW President Bob King was quoted as saying “I don’t think any human being deserves that kind of money.” Whether you agree or disagree with Bob King’s statement, his sentiments tap into a fairly popular belief in modern America. Many people question the compensation of the average corporate executive, and trends in executive pay indicate that the phenomenon is more prominent than ever…the average Fortune 500 CEO earned 343 times the amount that an average worker earned in 2010.

The question of executive pay in the auto industry is especially important today, as the UAW is eager to negotiate a new contract to replace the one that expires later this year. While automakers want workers to accept profit-sharing bonuses in place of pay raises, the UAW says cutting executive pay would save enough money to give workers a pay raise.

Which side is right? Should workers be happy with a bonus tied to profits while executives earn millions?