Do Auto Execs Make Too Much Money?

When Ford CEO Alan Mulally was granted $56 million in stock bonuses about a month ago, UAW President Bob King was quoted as saying “I don’t think any human being deserves that kind of money.” Whether you agree or disagree with Bob King’s statement, his sentiments tap into a fairly popular belief in modern America. Many people question the compensation of the average corporate executive, and trends in executive pay indicate that the phenomenon is more prominent than ever…the average Fortune 500 CEO earned 343 times the amount that an average worker earned in 2010.

The question of executive pay in the auto industry is especially important today, as the UAW is eager to negotiate a new contract to replace the one that expires later this year. While automakers want workers to accept profit-sharing bonuses in place of pay raises, the UAW says cutting executive pay would save enough money to give workers a pay raise.

Which side is right? Should workers be happy with a bonus tied to profits while executives earn millions?

How Much is Too Much?

Is any human being deserving of millions of dollars in compensation? LeBron James and Ben Roethlisberger earn millions for playing a game and Tom Cruise earns millions for playing pretend, so who’s to say that an auto executive who leads a company to billions in profit is overpaid?

Since Alan Mulally became CEO in 2006, the financial outlook at Ford Motor Company has improved pretty dramatically…they’ve gone from losing billions to making billions in just five years. While Mulally doesn’t deserve all the credit for this success, it might not be a stretch to say that Mulally was a big piece of the puzzle. 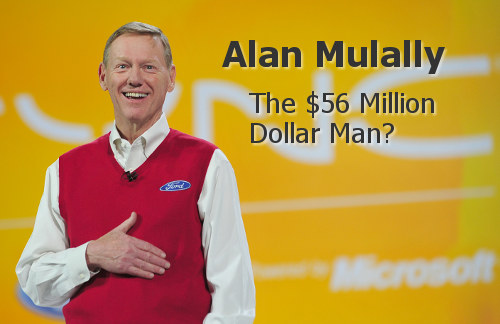 Is Alan Mulally the $56 million man?

If Mulally turns around Ford and helps them earn $6.6 billion in profit in 2010, is $56 million (which is only 0.84% of the profits earned) really too much compensation? What if we turn that question around and ask the following: Would you give someone $56 million if they helped you earn $6.6 billion? Of course you would. If Mulally’s leadership generates billions in profits, it’s perfectly rational to toss him a few million…at least from a purely financial perspective.

Still, Mulally is just a man. He may be smarter and harder-working than most, but is he worth millions more than someone working on the line? Can any human being be so great – so wonderful – that one minute of their time is worth $106 (the amount Mulally earned for each minute of the year in 2010)? The UAW doesn’t think so.

UAW President Bob King will tell you that Alan Mulally is a “great CEO,” but then he’ll also tell you that $56 million in bonus is too much because “It creates problems for Ford both in the salaried workforce and hourly workforce. It seems like one individual is getting all the gains instead of gains being shared by everybody.”

According to this report, King is trying to secure an additional $3,000 to $7,000 for each UAW worker in the upcoming negotiations as a reward for Ford’s success. Considering that Ford earned $6.6 billion in profits in 2010 (and that they’re tracking for nearly $11 billion in profits in 2011), the company can certainly afford to give their workers a bonus. One might even argue that Ford is morally obligated to share the wealth of their success with all their employees, regardless of how big or small their role was in the company’s success.

The problem is that giving autoworkers a nice raise in profitable years can be a long-term formula for disaster. General Motors, for example, gave their auto workers annual raises year after year starting all the way back in the 1950’s. By the late 90’s, worker compensation at GM was significantly higher than most of their competitors, and it’s arguable GM’s high labor costs in the 90’s ultimately contributed to their collapse in 2009.

Therefore, Ford must always have an eye towards the future when they offer workers any sort of permanent raise…which isn’t something UAW workers want to hear. Understandably, UAW members want to be paid as much as they can get for the work they do. Who among us wouldn’t expect a little extra when the company we work for is on track to earn historic profits?

When you look at the compensation problem that Ford and the UAW are trying to tackle, it’s hard not to notice that Toyota (along with Honda, Subaru, Nissan, and all the other transplant automakers) haven’t had many labor problems over the last 30 years. Toyota’s labor rules are:

While it can be argued that Toyota’s success as an automaker is largely a result of decades of dysfunction at GM, Ford, and Chrysler, it’s hard for anyone to argue that Toyota’s labor model isn’t successful. Bonuses have made Toyota workers some of the highest compensated autoworkers in the USA in years past, worker accountability has helped ensure industry-leading quality, and Toyota’s no lay-offs policy gives workers a sense of security that most union autoworkers don’t enjoy.

In fact, one needs to look no further than the recent earthquake in Japan to see the contrast between labor policies at Toyota and the “domestics.”

Because of the quake, Toyota will cut production more than 50% for the next few months across the globe…yet they haven’t announced any layoffs. GM? As a result of a parts shortage caused by the quake in Japan, GM laid off about 10% of the workers at one of their engine plants earlier this month.

Toyota can afford to keep all their workers employed despite a devastating earthquake that crippled their entire company, yet GM can’t keep 60 people on the job at a small engine plant in New York?

The writing on the wall here is that Ford, GM, Chrysler, and the UAW all need to acknowledge that their current relationship is broken. The UAW can’t demand a raise every time Ford/GM/Chrysler earns a nice profit, and they need to allow the automakers to hold individual members accountable. By the same token, Ford/GM/Chrylser should treat workers like partners who deserve a healthy bonus when the company is profitable, and laying off a worker should always be viewed as a last option.

Sadly, the rhetoric between the UAW and Ford/GM/Chrysler doesn’t indicate that a change is taking place. Despite the historic changes in the US auto industry in 2009, the two sides seem to be returning to the way things used to be.