Another Way To Mount Your Spare Tire – The TireGate

One of the primary differences between modern pickup trucks and true off-road rigs is the location of the spare tire. Most pickups, the Tundra included, stow the spare underneath the cargo bed at the back, tucked up to the bottom of the truck box. While this might seem to be a logical location to keep the tire, as it maximizes the amount of cargo space available, there are some situations where it is far from practical. 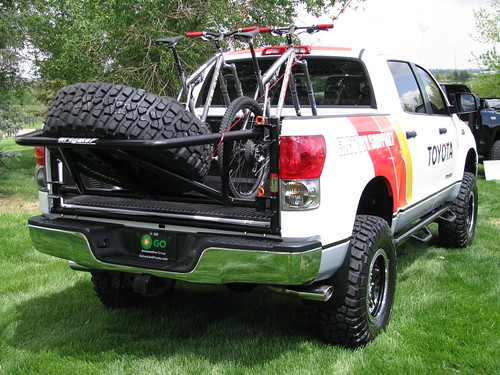 Here’s a new Tundra with the Tiregate installed.

For people who are serious about off-roading, an under-the-bed spare is not an option. To begin with, off-road vehicles need all of the ground clearance they can get, and having a potentially large tire hanging around near the rear axle where it could catch a rock or bottom out on the trail is a bad idea. Off-road tires are also usually 35-inches or greater, with a much more aggressive tread pattern than stock tires, making a true off-road sized spare difficult to fit in the stock spare carrier. The other main issue is that if a flat occurs while off-roading, it could put the truck in such a position that accessing the area below the box is impossible, due to the terrain, water or mud.

What has traditionally been the solution to this spare tire problem? You have probably seen the liftgate-mounted spare tire carriers common on SUV