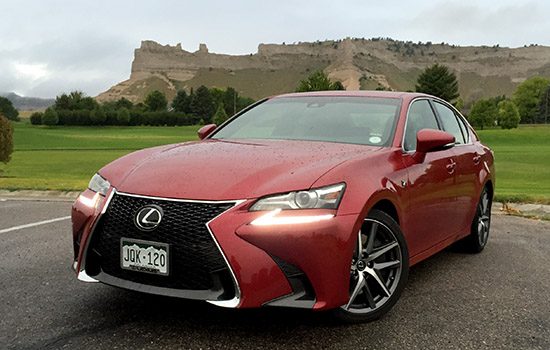 Before we get to the “thing I did” in the car, let’s talk about the car and what a car it is. The 2016 Lexus GS200t is a mid-size, performance sedan slotted between the compact IS and the flagship LS models. It competes directly with the BMW 5 series, Audi A6 and Mercedes-Benz E-Class. Also, it is new this year. 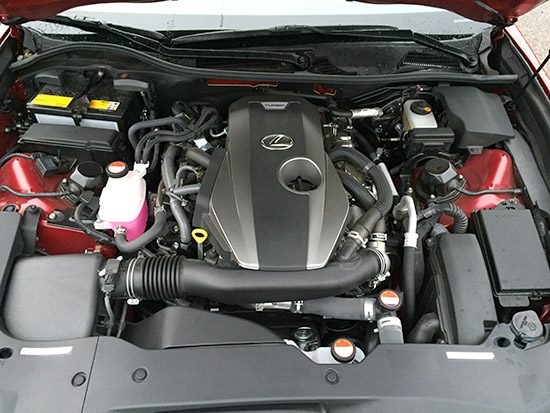 This is the new turbo-charged four-cylinder engine from Lexus making its debut in the GS model lineup.

The GS200t is the smaller, four-cylinder turbo-charged engine variant of the GS350. It adds yet another turbo-charged model in the Lexus lineup which aims to better compete with the other luxury competitors powertrains.

Unfortunately, the turbo-charged engine suffers from a good amount of lag which robs some of the fun of driving it. I’m not sure if this has to do with my 3,900 feet of elevation or if this is typical of many sports cars. I spoke with a variety of automotive journalists and got mixed opinions. For myself, I’ve driven several BMW sedans with turbo-charged engines and I don’t recall feeling any lag.

Fortunately, my test model was the F Sport variety and one quick turn of the driving mode selector knob to Sport + removed any lag. It also makes it really, REALLY fun to drive. The best way to describe it is imaging you are trying to run a marathon with a head cold. Lose the cold and your body hums along. With the cold, you are sluggish. Turbo lag is a lot like that. 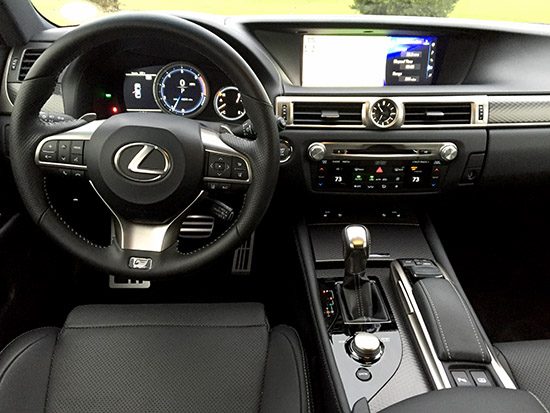 Lexus doesn’t cheap out on the interior on any of their cars and this GS200t is no exception.

After getting going, the car really holds corners well, feels silky smooth on good pavement and is just a great drive.

While the lag sucks, the car does not. The exterior is really sexy and the interior has all the high-quality materials and design you would expect from a luxury sedan. This car simply turns heads driving around and makes you want to spend copious amounts of time in it. 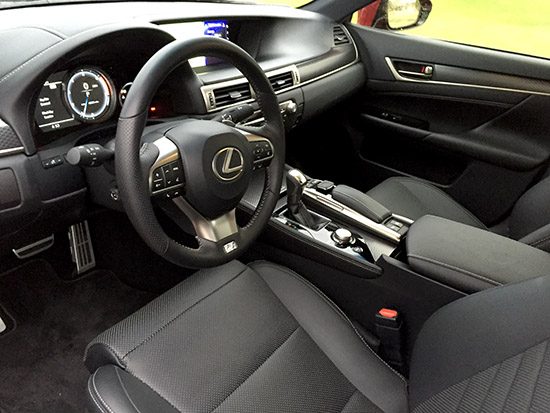 This interior is top-notch with plenty to like, however, I just couldn’t find a good seating position.

The copious amounts of time is cut a bit short, though, since no matter how much I tried, I couldn’t get a great sitting position in the driver’s seat. I’m not sure what is going on since I’ve never had a problem with Lexus vehicles in the past (and I’ve driven a lot of them).

I just kept feeling like I was sitting like a gangster with the seat ridiculously reclined. Yet, my both my hands and wrists could easily reach the steering wheel. Just was odd to me.

Remember how I said I did something in this car I’ve never done before in any press car? Yep, this story involves a rattlesnake. Warning! Cover your eyes if you are skittish.

One of the days I had it, I picked up my oldest son from his YMCA summer camp. This is near a campground and is a large pavilion building where the kids play all day. As I exited the car and stepped toward the building, I suddenly heard a rattling below my waist. Much to my dismay, as I looked down, there was a rattlesnake BELOW MY FEET! If my stride had been any shorter, I would have literally stepped right on it! The snake was curled up in the parking lot rocks and was likely enjoying the afternoon sun. Its skin blended right in and I never saw it. Plus, with the fall sounds of the crickets, I didn’t immediately hear it. 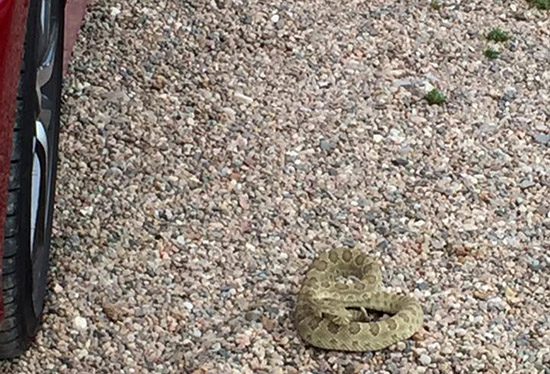 This snake was right off the driver’s side tire and I literally stepped right over it.

After gathering myself, my son spotted me and started towards me. Quickly and frantically I shooed him off. I still had to sign him out and, keeping an eye on the car the whole time, I got him and his stuff. After making him climb into the rear passenger seat and then hopping into the front passenger seat, I managed to climb into the driver’s seat. 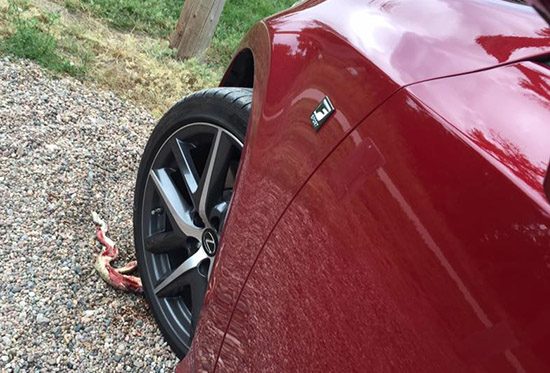 The Lexus made quick work of the rattlesnake.

I pulled out and then stopped. People are always coming and going from this building and many of these people are little kids. Plus, the snake was literally a sidewalk away from a sand box kids were playing in. I knew I had to do something.

Using the resources available – the Lexus GS200t – I ran the snake over a few times and even turned the wheel a few times for good measure. 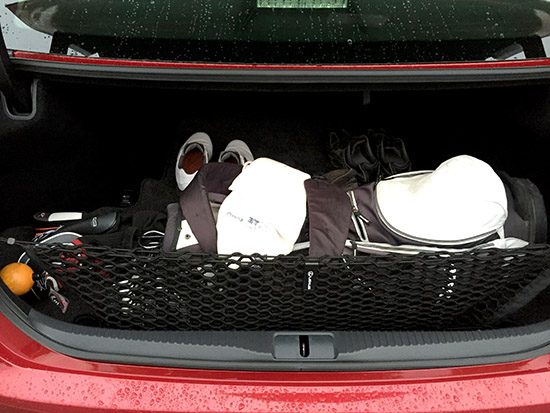 Fortunately, I had my clubs, which incidentally, fit really well in the trunk.

Then, fortunately, and I mean FORTUNATELY, I had my golf clubs with me. I watched and waited for it to finish its death rattle. Then took a golf club and flung it into the woods.

Now, let me address a few criticisms I’ve gotten with this story. First, animal control and/or the police often shoot rattlesnakes in my area. In fact, I called a police officer the next day and he confirmed they would have killed the snake. Second, there was a question onto why I didn’t just “relocate” it. Again, the only tools I had were golf clubs and a car. If you want to try to relocate a rattlesnake with a golf club, be my guest. I wasn’t taking the risk of being bitten and making the trip to the hospital. Third, I wasn’t about to just drive off and leave it be. This was a popular parking spot and kids were playing literally 30 feet away. I can’t imagine how much regret I would have if that snake had bitten a child. 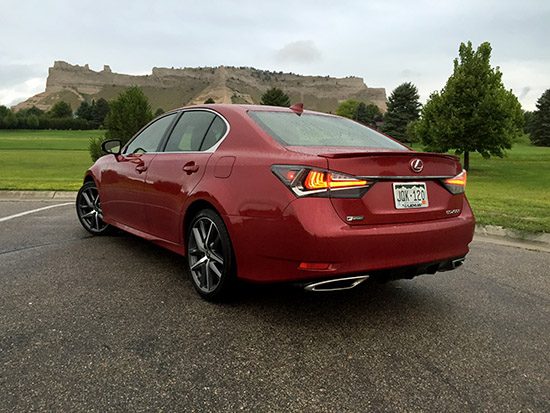 The rear wraps nicely with the front and it is really a sharp looking sedan.

That’s enough about rattlesnakes, let’s get back to the car. I’m completely convinced this is a great competitor to other mid-size, performance luxury sedans at sea level or with the turbo-charged engine working correctly. It drives beautifully, has great looks and it is pretty top notch inside. I just wish I could have enjoyed it to its fullest potential.