One of the fun parts of my job is getting the opportunity to drive a large variety of vehicles. For example, I recently drove a 2015 Toyota Corolla. While, it is a “just” a Corolla to many people, Toyota is working on changing this image.

Redesigned in 2013, the 11th generation Corolla has sharper lines and better styling.

Before getting this press loan, I hadn’t driven a Corolla in quite some time. Well since the last time I rented on at an airport in 2013. From driving it then and now, I find the Corolla to be about the same. An affordable, four-door sedan delivering good fuel economy at a great price. In a real sense, this is a perfect car – transporting people from point A to point B. Yet, it is a bit more than that.

Before I get to the “more”, let’s understand this is an important vehicle for the company.  Ranking second in sales to the Camry (30k units vs. 38k in July, 2015), the Corolla is a brand ambassador if you will for Toyota. Besides being known as an entry-level rental car, it is also an ideal student or first new car for many families. Getting new buyers attracted to the brand and turning them into loyal customers is a big job for most companies. Toyota went to work on attracting the next generation of buyers with the new looks and upgraded interior. This isn’t a 1990s Corolla.

The dash isn’t anything special, it is better than the older models and the amount of features is sure to attract new buyers.

The more is styling, interior features like paddle shifters (!), heated front seats, back-up camera and auto climate control. Through in a rear spoiler, moonroof and a litany of safety features, the Corolla is more than a rental car.

The driver’s seat offers a good driving position and there is a good amount of room considering its overall size.

Those features may seem odd to have in an entry-level car, but that is what holds consumers. I can’t tell you the amount of people I talk with who rave over their car’s back-up camera or paddle shifters. While, you can find those features in a slew of vehicles, consumers associate them with “their” car. This is great for companies like Toyota since many consumers don’t cross shop in reality. If “their” Corolla had paddle shifters than all other Toyota models should too is their thinking. 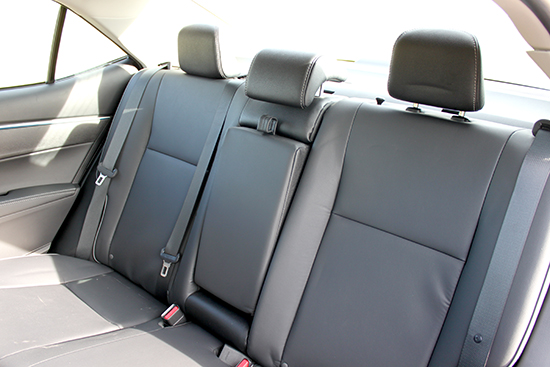 While it seems like the “more” is a bit unnecessary and just drives up the price. Not so. Our test model came in at $24,479. However, let’s look at this via payment terms like most consumers. While each person’s credit, down payment and other details varies, we would expect this car to come in under $400 a month and could be considerably less. This is under the national average of $479 a month that many consumers agree too. Plus, 29/37/32 city/highway/combined fuel economy helps save the buyer money on gas which they can put toward their payment.

Driving the Corolla is still nothing to write home about with its 1.8L, 4-cylinder engine mated to a continuously variable transmission. The paddle shifters are fun a addition, albeit a bit of a novelty item. It corners and drives OK with most road noise getting through into the cabin. Yet, it is easy for most people to drive and entry/exit is pretty good for both the front and back.

Toyota has strived to reduce the “bland” and add in more “wow” to the Corolla.

In the end, I like the direction Toyota is going with the Corolla. The more “edgy” styling is sure to attract new consumers while offerings a bunch of features will keep them loyal.