One of the great things about the off-road market is how automakers push the envelope of their stock offerings. This can be a critical segment for truck makers trying to win over selective buyers as well as enticing stock truck buyers to splurge for the off-road version. Also, like the case with the Ford Raptor, an off-road truck can help define the brand. With all of this at stake, Ram and Toyota loaded up their modified stock trucks will all sorts of unique style to appeal to an off-roader. 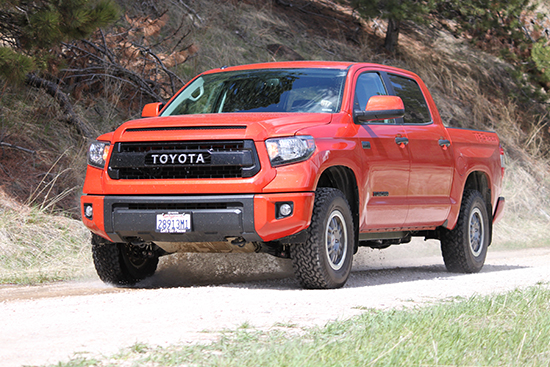 While there are differences between the two trucks, they each share some design similarities.

A quick example of this is found in the unique grilles for both trucks. In each case, the truck makers made a statement with their name emblazoned on the front. The front may have a similar marketing strategy; the rear is quite a bit different. Ram added its large lettering on the tailgate and even added raised lettering behind it (a nod to those wanting to ‘de-badge’ it presumably). Toyota took a more different approach by adding more subtle TRD Pro embossing on the bed. 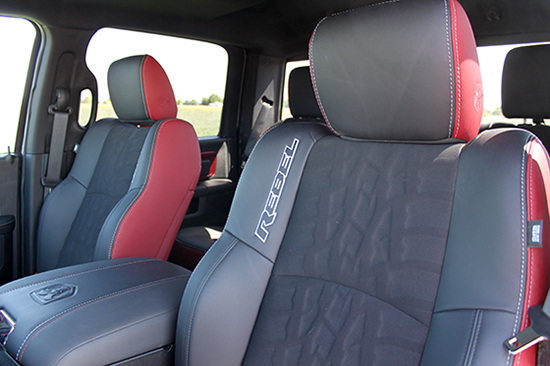 The tire pattern on the seats is a nice touch.

Inside, both trucks feature unique styling language speaking to their off-road nature. Ram features a Toyo tire tread pattern on the seats and embossed logo touches throughout. 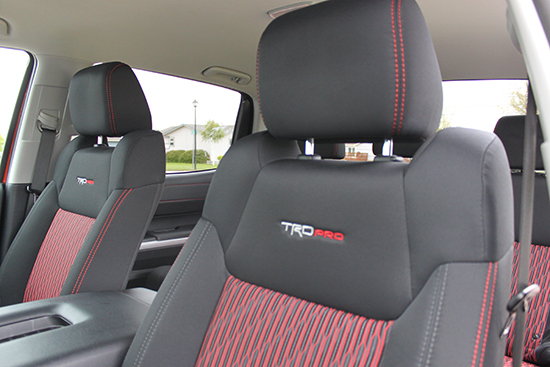 Toyota counters the Rebels tread pattern with their own unique design.

Toyota adds its share of unique logo touches throughout, including a large nameplate on the center console, plus unique interior seat colors with red stitching.

Starting with the tires, both Ram and Toyota knew bigger was better for clearance and attracting buyers. 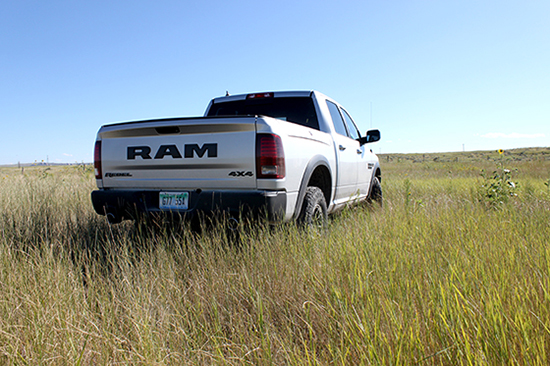 Interestingly, the large Ram lettering isn’t as outrageous when I first saw it.

For the Toyota Tundra it uses a similar wheel setup. Every TRD Pro is equipped with 32-inch Michelin LTX AT2 tires mounted on 18-inch alloy wheels. NOTE: our test model came with slightly different wheels than stock.

Both tires are firsts for each company. Ram has never used the Toyo tire before in their lineup and Toyota says the Michelin tire was designed exclusively for them.

Big tires are great, yet without a good suspension it will feel like you are riding on bricks. Both the Ram and Toyota offer Bilstein-shocks and factory-tuned springs. The similarities end there. 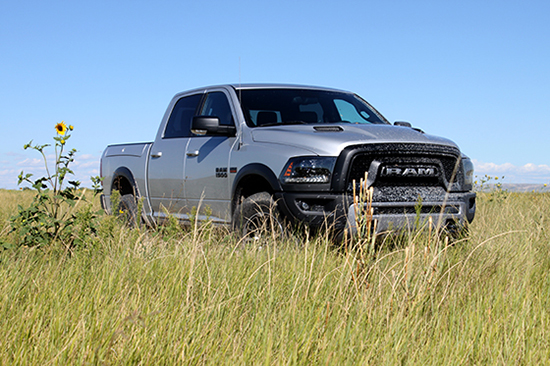 The additional off-road height setting comes in handy when leaving the pavement.

In the case of the Rebel, Ram kept their air suspension setup, they use throughout their lineup, and added a new off-road setting. Pushing the ride-height button raises the truck an additional 1” above the normal riding mode and pushes the truck to a maximum of 10.3 inches of total ground clearance. Plus, Ram modified the alignment of the lower A-arms as well as tire angle to handle the load of the tires better. Also, a new steering calibration takes into count the new tires and a re-tuned rear stabilizer bar helps further improve the driving dynamics.

For the Toyota, the truck adds height through a 2” front lift and the larger tires. Toyota also reduced the spring rate to improve the ride quality on harsh off-road trails. Plus, the Tundra offers increased wheel travel of 1.4” in the front and 1.5” in the rear. This increased wheel travel allows the truck to get better on and off-road traction thanks to increasing the amount the wheel can move up and down on bumpy roads.

The only area where both of these trucks remain unchanged from their stock brethren is under the hood. Both Ram and Toyota decided the stock engine was plenty powerful for its target customer base.

For Toyota, they don’t even offer a V6 anymore in a full-size truck. Their off-road truck features their 5.7L i-Force V8 producing 381 hp and 401 lb-ft of torque.

While power outputs are pretty similar in both V8 engines, the Rebel is equipped with Ram’s 8-speed transmission while the Tundra uses a 6-speed.

Further making a difference is the torque curve of the trucks, transmission gear ratios and rear gear differential setups. The Tundra is rated at 401 lb-ft at 3600 RPMs while the Ram’s 410 lb-ft rating is at 3,950 RPMs. Plus, the Ram transmission has a really short first gear of 4.71 to accommodate for a torque converter clutch, while the Tundra shifts at the taller 3.33 ratio. These differences mean driving both trucks will feel different even to a novice driver with the Ram flying through gears while the Tundra will hold first gear longer off the line.

Both trucks are offered in a 2wd or 4wd setups. The Ram is offered with two different rear gear ratios – 3.92 or 3.21 – in the Hemi powered models. Toyota offers the 4.30 rear gear ratio.

Driving both the Ram Rebel and Toyota Tundra TRD Pro on road and off brings a smile to the face. Both trucks are ideally suited for playing in the mud, sand or whatever else you throw at them. On road, the differences are subtle and interestingly, how they compare to their stock brethren is really the big difference.

For the Ram Rebel, as one would imagine with the larger tires, it rides rougher than the stock version. Yet, it isn’t unbearably rough. In fact, Ram engineers have tuned the suspension to work well with the additional rubber. It doesn’t drone nor bounce and could easily be an everyday truck. 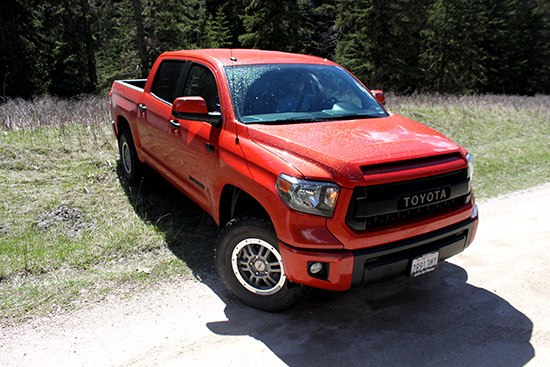 The Toyota Tundra TRD Pro rides better on and off pavement then the stock truck.

On the Tundra TRD Pro, I have said and continue to say, it rides better than the stock version. The addition of the shocks and different suspension setup creates a smoother ride on pavement and off. In fact, I would go as far as to say it rides nearly the same as the Rebel.

While I am certain I am missing some minute technical details like turning radius and shock return rate, for the average joe, the trucks ride about the same.

Toyota offers the Tundra TRD Pro only in 4wd and starts with a Double Cab priced at $42,385 including a delivery fee of $1,100. Order it in a CrewMax and it pushes that price to $45,000 including the destination price.

In the end, both trucks are pretty great choices for off-roading. It really just depends on what styling you prefer and whether or not you prefer the air ride suspension or the additional wheel travel.