With new 2014 Toyota Tundra coming out this fall, the question on a lot of journalists minds is will consumers by now or wait until the 2016 CAFE regulations start kicking in. This could be a tricky question for some consumers and could have unforeseen ramifications within the industry. 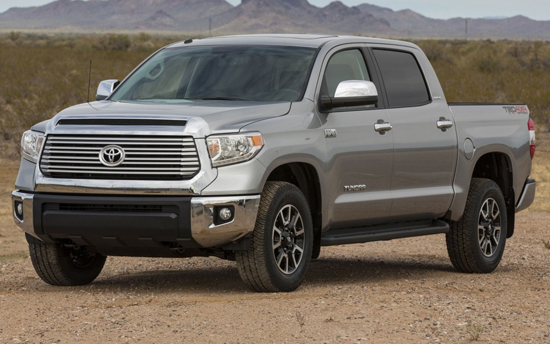 What should a truck consumer do? Buy now or wait until after the CAFE regulations.

For many Toyota fans, the 2014 Tundra is/was a bust in terms of new power train improvements. And many of these fans are predicting changes in engine offerings and transmission choices in 2016. This makes a lot of sense when you look at past Toyota product improvement roll outs, but it also makes a LOT of sense when you consider the new CAFE regulations will affect 2016 model year vehicles.

In case you didn’t know, the Corporate Average Fuel Economy standards got a big boost when on December 19, 2007, President George W. Bush signed the Energy Independence and Security Act. This act originally set the standard for 35 mpg by 2020 and was the first big step in strengthening the CAFE standards that were first enacted in 1975. In 2008, the National Highway Traffic Safety Administration formally switched to a “footprint” equation to evaluate MPG standards. In 2009, President Barrack Obama directed the NHTSA to review the standards passed in 2007 and improve on them as needed. This is where we are at today. Automakers need to improve 2016 model year pickups, by 8-10 percent MPG or be hit with fines.

This begs the question, do you buy a 2014 model when the 2016 model could have significant power train improvements? Or is it foolish to think that the 2016 CAFE regulations will have any impact on the light-duty full-size Toyota Tundra? Will automakers simply use credits from other vehicles to offset full-size truck being over the limits?

We thought we would address these questions in a unique way. Here then is a Q&A with Tundraheadquarters.com editor Jason Lancaster and Associate Editor Tim Esterdahl. Tim asks the questions:

Q. The new vehicles are projected to cost a few thousand dollars more, yet with 8-10 percent more fuel savings (if not more). Payback period could be 3.5 years or so (EPA official said this). Is it worth it to wait and buy a new fuel efficient model?

A. It’s a great question. The trouble with a higher up-front costs isn’t just the cost of the vehicle – it’s the additional sales tax, additional finance charges, and the increased complexity (and subsequent increase in repair and maintenance costs).

As far as Tundra and Tacoma are concerned, now is the time to buy. The new trucks (which might not actually hit until 2018, as Toyota has lots of EPA credits built-up) will be more expensive and probably not any more capable.

Additionally, there’s never been a better time to lease a new truck. Not only are residual values sky-high, but you’ve got a chance to choose between buying your own lease return or a fancy new truck…it’s a smart option for anyone thinking about buying a new truck.

Q. If the new vehicles promise a big MPG increase, could the CAFE regulations cause a downturn in the auto industry (more people waiting, not buying)?

Additionally, the economy is expected to be fully recovered in the next year or two, and that’s going to drive sales. People with cash in hand hate to wait.

A. I think we’ll see the biggest changes in 2017 and 2018 – don’t think anyone is going to come out with the new product until the very last minute. We might not even see some changes until 2020.

Keep in mind that EPA credits are available on the market (Honda can sell their credits to Ford, for example, to help offset Ford truck sales) and that paying fines might be an acceptable option for Ford, GM, and Ram (at least in the short term). If Ford coughs up $100 million in EPA fines, but sells 600k trucks, that’s a penalty of $167 per truck sold…that’s a lower cost per vehicle than using aluminum magnesium alloy, investing in direct injection, etc.

Don’t get me wrong – I don’t think automakers are going to pay fines in the long run – but it might be OK to pay fines for a few years. Ram, for example, could just pay fines while Ford and GM hash out the new technology…then sweep in and buy the same technology off the shelf without investing in any R&D. Their trucks aren’t as fuel efficient, but they’re also less expensive, and some buyers prefer them because they’re “simpler.”

So in other words the timeline is still up in the air.

Q.  Are we going to see a slump in cars sales next year with the wait and see approach?

A. Probably not. Consumers buy when they have the money, not when it’s rational.

What do you think? Do you have questions for Jason that weren’t asked? Comment below and he will answer them.