2014 Silverado Rumors: Truck will be Taller, Crew Cab To Have 6.5 Foot Bed, and More

The big news from Las Vegas GM/Chevy dealers convention is the 2014 Silverado will have a 6.5′ bed on the crew cab, be taller  and have a direct-injection engine with cylinder deactivation. The truck will also offer a four-door extended cab setup like Tundra double cab. It will also have more leg room comparable to the Tundra and F-150. Will these long-overdue changes finally make it more of a competitor in the full-size truck market? 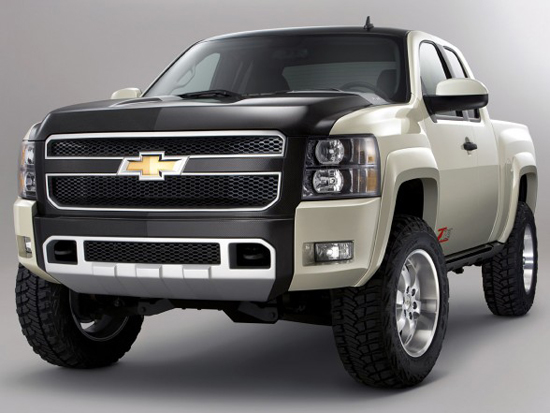 Rumors have it that the 2014 Silverado will look a lot like this 2013 with just modifications for customer convenience.

Currently Silverado crew-cab models come with a 5 3/4″ bed. This smallish bed has been hammering sales when compared to larger 6 1/2′ beds that Ford and Ram have. Silverado’s 6 1/2′ bed will be offered as an option in the next-gen models.

While, we have been hearing lots of rumors about how the next-gen GMC/Chevy pickups will be more “locomotive” in design, dealers didn’t see much of a change. Rather according to a news story in Automotive News, dealers thought the changes were more “evolutionary” than ground breaking.

As with most American-styled pickups, the trend to get “bigger” is still in vogue. The next-gen Silverado follows right along with the plan to make it 3-4 inches taller. Even though this might be a great idea for certain people, we have our doubts. The big reason? Where are you going to park this thing?

Pickups are already getting wider and now adding taller to the list is going to compound the parking issue. The reality is that a lot of people with older homes will have a tough time getting it to fit in their garage. A 2013 Silverado Extended Cab 4×4 is 73.7 inches tall. If you add 3-4 inches to that, you’re not going to fit into a lot of garages. Most garages have 6′ 8″ or 6′ 7″ of height (79 or 80 inches). However, you have to subtract 3-6″ from that figure for the bottom of the garage door (almost all of which hang down a bit in the raised position).

It could be that this “taller” promise is just going to be the 2wd trucks, but that would mean Chevy/GMC will probably use blocks to raise the 2wds…and blocks have a lot of negatives. SO, this decision to make the truck taller is a mistake, as we see it.

Another new item is the addition of rear doors to extended-cab models. This is really just a response to customer’s needs for more convenience when using the back-seat. The hope is that with this change, the Silverado will better compete with other competitor’s comparable models. The extended-cab Silverado typically accounts for 20% of its total sales.

A small, yet convenient item will be GM’s plan to install LED light in the bed rail. These lights are simply handy when using the bed at night or when it is dark. Really don’t see this as a big selling point since after-market LED kits have been around for quite a while.

And a oh by-the-way, GM is planning on launching the “High Country” luxury package. This long-overdue package is meant to position the Silverado as more of a competitor to the luxury packages of just about everyone else.

Last, but not least, you will now be able to stretch out more comfortably when using the rear-seats in the Silverado. The plan is to add “several” more inches of leg-room. Currently, the Silverado gives up as much as 4 1/2 inches of leg room to Ford’s crew-cab pickups and 1 1/2 inches to Ram’s crew cab pickups.

Will all of these changes make a difference? Currently, the Silverado is GM’s top-selling vehicle (and probably most profitable). It seems though that it gets left behind the other competitor’s who have updated styling (2006/07 Silverado redesigned) and/or are adding many new features like in-dash navigation. Is it an after-thought or a real full-size truck option?