Car shows are funny things. You become super excited while everything is going on and you are bombarded with information. Then, you step away, let the excitement wear off and you can finally put things into perspective. Here’s is my perspective. 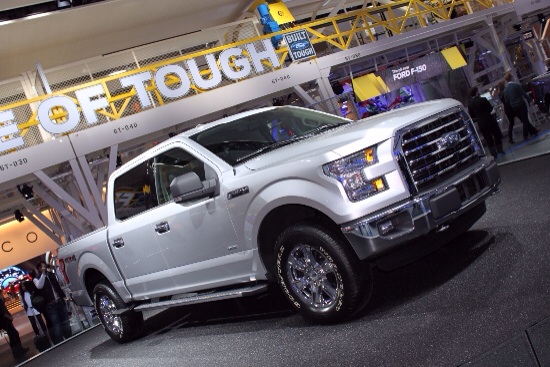 The new Ford F-150 sure looks great now, but what will happen when it gets beat up a little?

Let’s be frank that the 2014 NAIAS show will be dominated by the 2015 Ford F-150 release. Everybody knows this including GM who held a special unveiling of their GMC Canyon the day before. Industry people knew that when the Ford F-150 was unwrapped, nobody was going to talk about the Canyon. They were right.

Ford certainly did its part at this show. The F-150 blew people away and the press conference reveal was incredibly impressive with the size and scale. It will be talked about for quite a while in my opinion.

With all the new technology and materials Ford is using it is hard to not be impressed. They really helped those who tow with a light below the tailgate latch that shines on the hitch and the computer software built in that helps guide a driver to the ball. Those are pretty nice.

Also, Ford really did try to drive home that the new truck would still be “Ford Tough.” They pointed out the metals used are the same ones used in airplanes and they drove over 1 million miles while testing it.

Yet, with all their innovations comes additional costs and not everyone is going to be overjoyed by them. The use of aluminum is pretty great, except there are just a lot of unanswered questions about it. Yes, Ford drove a lot of miles testing it, but what happens when it gets used on the farm? What happens when you load hay, cattle or go off-road in it? Not by accident, there was no mention of the Raptor at the show. Seems to me if Ford was so confident in the new material, they would lead off with an aluminum-based Raptor. That didn’t happen.

What about the engine offerings? The tiny Ecoboost engine is an interesting idea that makes me think Ford was trying to appease the crowd that wants a F-100. Does it belong in a true “work” truck? Nope.

At the end of the day, with all the innovations from the new Ford truck, the excitement was still about the Ram Ecodiesel. Yes, it has a return on investment question. And yes, quite a few consumers think it is the end all, be all solution. Yet, despite the newness of the Ford and it’s features, it really isn’t that different of a truck. The Ram Ecodiesel though will be an entirely different matter. The success of that engine could unhinge the truck market MORE than an aluminum Ford truck.