New Engines Don’t Burn Much Oil, But They Burn Some

As a general rule, newer engines (1990 or later) don’t burn much oil unless:

Therefore, a 60k mile 2007 Tundra really shouldn’t be burning oil (at least not much – more on that below). We’re not specifically aware of any problems with 2nd-gen Tundras burning oil, nor any other recent Toyota models. This isn’t a “Tundra problem” we’re aware of.

Still, most owner’s manuals suggest that vehicles can and do burn oil, as they recommend checking oil levels between changes. This is because engines can “consume” oil in a variety of ways:

Generally, most people accept that engines will consume less than a quart of oil between changes. Some vehicle manufacturers (Ford and GM) say that engines can consume as much as one quart of oil every 1,000 miles with no adverse effects. However, this much oil consumption is sky-high as far as Toyota engines are concerned.

What’s Going On With This Tundra?

First, the 5.7L Tundra has eutectic pistons, as they’re designed to accommodate the TRD supercharger. This means that they’re a little more expansive than pistons used on other Toyota engines.   To ensure these pistons don’t expand beyond the confines of the cylinder, they’re made to be slightly out of round when cold. Thus, the rings don’t form a perfect seal between the piston and the cylinder wall until the pistons themselves have warmed up. A little oil is going to sneak buy until the engine is warm.

If this Tundra doesn’t spend a lot of time at full operating temperature (because it’s used for short trips mostly), it’s going to consume oil more than expected. 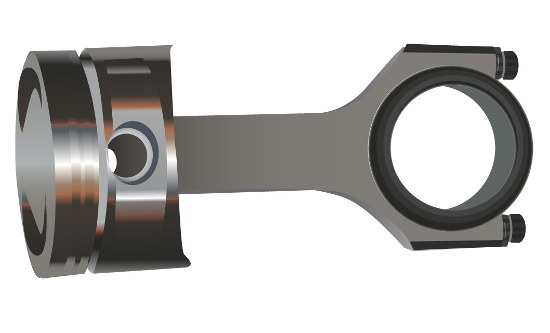 Eutectic pistons expand more than hypereutectic pistons, but they’re not as brittle, and thus ideal for an engine that may be supercharged.

How To Check Your Truck For Oil Consumption

Checking for oil consumption is easy – just be sure to compare a dipstick reading in the same circumstances. Don’t park your truck on an incline, check the oil when it’s hot, and then repeat the check when the engine is cold and the vehicle is parked flat. (Ideally, you could check oil levels when the truck is parked on flat ground and the engine is nice and hot.)

If you’ve checked the oil and notice oil consumption, try and get a grasp on how much. If it’s a quart or more between oil changes, it’s something you need to monitor. If it’s half that amount, don’t give it much thought.