Why Install After Market Shocks on your Toyota Tundra?

Why change the stock shocks on your Toyota Tundra for a set of aftermarket units? There are actually several reasons why so many truck owners elect not to return to factory components when it comes time to replace their damping system. Let’s take a look at some of the top reasons why aftermarket shock replacements are so common.

1 – Factory shocks are a compromise. Every vehicle marketed in North America, even those which are intended to provide maximum performance, have several compromises designed into their suspension systems. One of the most glaring is shock absorber specs. Stiff shocks might be great for fast reactions on the race track, planting serious power on launch or controlling body movement on an off-road trail, but they don’t cut it when it comes to comfort for the majority of drivers. The Toyota Tundra’s shocks err on the side of comfort to the degree where they don’t even come close to showcasing the limits of what the vehicle’s chassis has to offer. Aftermarket shocks provide you with the chance to match the response of your suspension with the intended purpose of your truck. 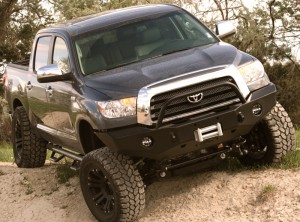 If you are going to lift your Tundra, then you will want to make sure your shock absorbers can function within spec.

2 – Factory shocks are designed for a very specific operating range. Want to lower or lift your Tundra? Be prepared to deal with reduced shock performance. When Toyota designed the Tundra’s suspension system they meant for it to be operated within a very close approximation of the stock ride height. If you decide to stray too far in either an up or down direction from that stock spec, then you will no longer benefit from optimum shock response. Once again, the aftermarket provides shock absorber answers to match your ride height plans.

3 – Factory shocks are cheaper quality but often higher cost than after market models. Remember, when Toyota prices out their replacement parts, they’re usually charging 2-20 times more than they paid for the part. They do this because, frankly, they can.

Factory/OEM parts are usually the highest quality option, but when it comes to wearable items like shocks, Toyota shocks aren’t any better than after market shocks. In fact, shocks are one of the few parts where it’s better NOT to buy a factory replacement.

4 – Factory shocks might contribute to the dreaded “bed bounce.” Some Toyota Tundra owners are plagued with bed vibration that can throw cargo around and which might also shorten the life of the body. It has been suggested that aftermarket shock absorbers can help absorb some of the vibration that causes this problem, although there has been no official word from Toyota regarding this potential fix.

There are of course other reasons why truck owners move to aftermarket shock absorbers, but these are some of the most popular. If anyone has any particular experience with aftermarket shocks and would like to recommend them for a reason we might have missed, please feel free to do so in the comments section.

Also, check out this list of available after market Toyota Tundra shocks.