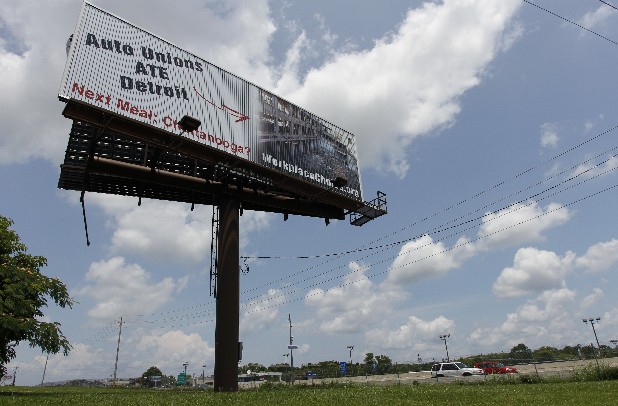 The city of Chattanooga has become ground zero for another debate on the pros and cons of the UAW. It will likely see all sorts of claims and accusations go flying as the UAW tries to rebuild itself in the wake of the auto recession.

A Times Free Press story says that the pro-union forces of the United Auto Workers are trying to build a case for the unionization by claiming they have a new model. This new concept is “where the workers and management aren’t adversarial but rather vie for the same goal,” according to the story.

Of course, the anti-union advocates call hogwash on this idea. They are pointing out the legacy of the UAW’s impact in Detroit with a billboard that states “Auto Unions ATE Detroit. Next meal: Chattanooga?”

In an effort to gain more support, Matt Petterson, senior fellow at the Competitive Enterprise Institute’s Center For Economic Freedom (group responsible for billboard), is rounding up support from all parties especially tea party activists. He has meet with the local president of the Chattanooga Tea Party who supports his cause.

“We’d generally resist unionizing a plant,” he said. “We’ve seen what happened with unions across the country, specifically Detroit.”

On the flip side are Volkswagen employees and union supporters. One such smitten supporter, Ed Hunter, has been working on education efforts that will “inform employees about a German-style works council labor board and ‘the new UAW.'”

Adding experience into the mix, VW employee representative Juergen Stumpf has been assigned to the plant to be an information resource. He is considered an expert on the German works councils system. These work councils are separate from the union and represent employees in discussions. “Under U.S. labor law, employees must set up a works council and a union would be required to do so, officials have said.”

The Chattanooga plant is the only major VW facility without a works council.

The UAW is working hard to collect signatures of the majority of the company’s workers to see their side. This includes sharing pamphlets that spell out the UAW’s new principles for organizing. “The union says that global competition in the auto market has changed the way it operates and the union ‘no longer presumes an adversarial work environment with strict work rules’ or narrow job classifications.”

What is at stake? A new sport utility vehicle being added to the production at the plant. A top official with a global works council has threatened to work to block the production until “it is clear how to proceed with the employees’ representation in the United States.”

Essentially, the vehicle’s production is being held hostage while the UAW tries to prove it is different than the one that destroyed Detroit.

It seems yet again the UAW is part of an American assembly problem. Good grief.