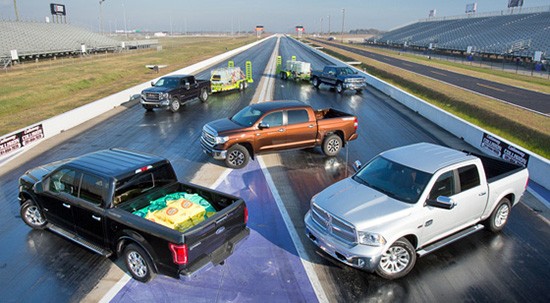 If you haven’t seen the story, essentially Pickuptrucks.com decided to do a towing “showdown” in Texas and invited in all the different half-ton competitors. The thinking is Texas is home to the largest full-size truck market in the world and the terrain provides ample opportunity to do a variety of tests. PUTC asked each competitor to send a 2-wheel-drive truck equipped with standard towing equipment around $51,000.

Click here to see the first post and work your way to the end. For reference, here is how the Tundra fared:

The Verdict: “Perhaps a Tundra equipped differently could have made a better tow rig,” Bruzek said, “but this Tundra with its off-road package was far outclassed for a comparison on maximum towing.”

Quick start: The Tundra “launches with authority,” Smith said, and Williams agreed: “The engine and transmission is always ready to jump off the line.”

Transmission: “It may be short a few gears compared with the others,” Bruzek said, “but the Tundra has very positive shifts from its six-speed package.”

Handling: “Its light steering effort makes for quick lane changes, despite being the heaviest in this comparison,” Bruzek said, and Smith liked how the Tundra “handles the trailered load.”

The 1794 trim level: Bruzek liked the “beefy looks of its TRD Off-Road Package,” while Williams said that “the 1794 Edition is a good first attempt with room for improvement,” and Sundling appreciated its “quality luxury interior.”

And …: Smith liked the “overall visibility.” Sundling applauded that its “4.30 axle ratio is made for towing; you have to go to a Ford F-450 to get that axle ratio.” And Williams noted that “there is nothing like the CrewMax cab out there. It’s an entirely separate room in the back of the cab.”

Poor mpg: It “inhales fuel,” Smith said. “The fuel mileage is the lowest in this group,” Sundling noted, and Williams added, “fuel economy for a truck like this in a segment this competitive needs to be much better.”

Transmission, while towing: “It did a lot of hunting when loaded with a heavy trailer,” Williams said, and Sundling found that “at slower speeds, even in Tow mode, the transmission hunts for gears and doesn’t stay in gear until it reaches higher speeds.”

Ergonomics: Smith disliked “the Tundra’s placement of switches and knobs,” while Sundling noted that he’s “glad they finally have a factory trailer-brake controller, but it’s hard to see while driving and using the manual control.”

The exhaust note: “The optional TRD exhaust is an initial novelty that grows old the more miles you put on the truck,” Bruzek said, and other judges agreed.

And …: “Most outdated truck in the group, other than the sheet metal,” Sundling said. “Brake pedal feel is light and uncommunicative,” Bruzek said. Williams found that there was “too much sagging in the rear end with payload; 1,200 pounds of [calculated] payload here is unconscionable.”

When this test was published, I was out of town and after reading the comments on this site, it seems the biggest question mark for our readers and PUTC’s testers is why Toyota didn’t send a more comparable truck. In fact, this isn’t the first time Toyota has sent a different truck than requested.  For the 2015 light-duty V8 challenge, Toyota once again sent an odd model choice for the test.

Why does this happen? It all comes down to what is available at the time and production limits. Since Toyota has been pushing only certain variations of the Tundra lately, there are plenty of these trucks in the press fleet, so Toyota sends what they have rather than pulling a truck from the production line (like often happens from the competitors). This pretty much puts the truck in a losing proposition before the test begins.

Like the light-duty challenge, I would argue the Tundra would have fared a lot better if the appropriate model was sent. While losing one test isn’t that big of a deal, when it comes to vehicle of the year awards, it also hurts since many of these same judges vote on those vehicles as well. Consequently, the Nissan Titan won the Cars.com Pickup of the Year Award besting the Toyota Tacoma. If you don’t think how poorly Toyota fares in head to head testing plays a role then you are just fooling yourself.

PUTC’s says up next will be a MPG challenge. Our prediction for that test is simple – Tundra dead last.