The Tundra Is Now America’s “Most American” Pickup

Every year, Cars.com uses domestic content data from NHTSA and automaker-supplied data to pull together a list of the “10 Most American” vehicles. Over the last three years, the Tundra – with 80% domestic parts content – has been on this list.

* – The Ram 1500 ranking excludes regular cab trucks, which are assembled in Mexico.

What do you have to say about that, Ford, GM, and Chrysler-Fiat truck owners? 🙂

Why Ford and GM Trucks Fell From The Top 10

If you looked at the table above carefully, you’ll note that the F150 fell out of the rankings pretty dramatically this year. The reason? Ford’s newest F-150 uses more foreign-made parts than ever before. The “F-series” has only 55% U.S./Canadian content according to this NHTSA document (pdf). While the moniker “F-Series” includes all of Ford’s trucks, lately Ford and GM have been moving manufacturing to Mexico where workers earn $26 dollars a day instead of $26 dollars an hour.

Also, because this list is sales-weighted, GMC and Chevrolet – which currently source all of their crew cab pickups from their assembly plant in Silao, Mexico – don’t get as much credit for building all of their regular and extended cabs in Roanoke Indiana. The idea is, if about 30% of GM’s 1500 series trucks are built in Mexico, then the domestic content of the entire 1500 model line should be adjusted accordingly.

Whether you agree or disagree with how the list is generated, the basic facts are undeniable. Toyota’s Tundra has the highest domestic content rating of any pickup, and it’s 100% assembled in the USA.

While Cars.com has excluded hybrids in their calculations over the past 4 years, 2010 is the first time a specific sub-model has been excluded from the rankings. The Ram 1500 is the 7th most American vehicle on their list…unless you buy a regular cab. In that case, never mind.

Anyone else think that’s a little screwy? Maybe if GM could have excluded all of their Silao built crewcabs, they could have been on the Top 10 list too. This inconsistency doesn’t make any sense.

Here’s Why The Tundra Wins By Default

1. ALL Tundras are built in the USA. Since 2007, the Tundra has had 75% or more domestic content (80% in 2010). Every Tundra has either been built in Texas or Princeton, Indiana since the model debuted in 2000…the F150, GM trucks, and Ram have all been built in Mexico at one point or another over the last 10 years. 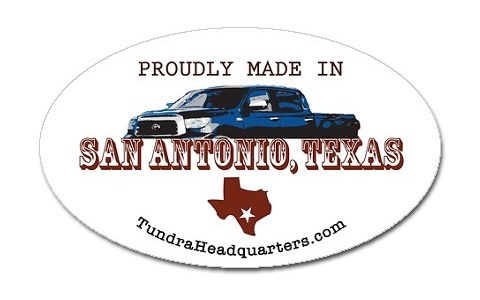 Tundra owners, click on the image above to get your very own Made In Texas sticker.

2. Toyota has invested more in new US plants than Ford, GM, or Ram over the last decade. While GM, Ford, and Chrysler stumbled and shuttered plant after plant after plant, Toyota has invested $1.5 billion in San Antonio, $514 million in Alabama, and $800 million in Mississippi (down from an initial plan of $1.3 billion). While it’s true that Toyota oversaw the closure of NUMMI, GM’s decision to pull out of NUMMI forced Toyota to do the same…so they only get half the blame on that one. BTW, Toyota offered NUMMI workers a $250 million dollar severance.

So, while the domestics closed plants, Toyota built new ones.

…But All The Profits Go To Japan

This is a classic argument for people to “buy American,” but it really doesn’t make sense. First of all, it’s not true that ALL of the profits go to Japan. We’ve proven that a big chunk of Toyota’s profits stay in the USA. Secondly, so what if they do? Toyota earned $12 billion in profits in 2005 (Toyota’s most profitable year EVER), but that was only 6.3% of their total revenue. The amount of profit Toyota sends to Japan is SMALL in comparison to the amount of money GM, Ford, and Chrysler-Fiat are sending overseas for parts and labor!