Toyota sponsored a three-day mini-machine competition with schools all around the globe in late April, 2012. Not your average “rubber bands and popsicle sticks” competition, these kids got some serious engineering prowess. 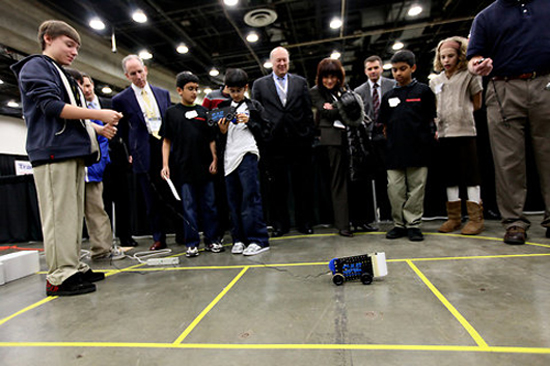 The event held at the Cobo Center in Detroit, Mi brought in many schools including several from Detroit (spots for them are reserved) and one all the way from New Delhi, India.

The competition has teams of three to four students working together to create vehicles from kits they are given in the morning. The students are allowed to only use parts from those kits and are not allowed to receive any engineering assistance. Industry volunteers are used as judges.

Matt Miller, director of the SAE Foundation, the charitable arm of SAE International said that each day is a little different. “The student-built vehicles are powered by electric motors on Day 1 of the competition, balloon-fueled jet engines on Day 2 and proton-exchange-membrane fuel cells on the third day of competition,” he said according to a story in the NY Times.

After the students build the cars, the vehicles were put the test with steep ramps, sharp turns and obstacle courses. The teams were assigned lanes and for the rest of the competition they were allowed to use that lane for practice and competition. Each lane was one meter wide and four meters long.

The event has become very popular over the years and with good reason. The competition is the culmination of classroom instruction which is sometimes led by industry experts. These kids aren’t your average students, they are the next generation of automotive engineering.