Toyota, Honda, Nissan, Mitsubishi, Subaru, Lexus, Scion, Suzuki, Acura, Infiniti…they were all hurt in some way by the Japanese earthquake and tsunami. Some manufacturers were hit harder than others (Honda might have been hit the hardest), but all of these companies suffered as a direct result of this disaster. In fact, a lot of American automakers suffered from the earthquake too. 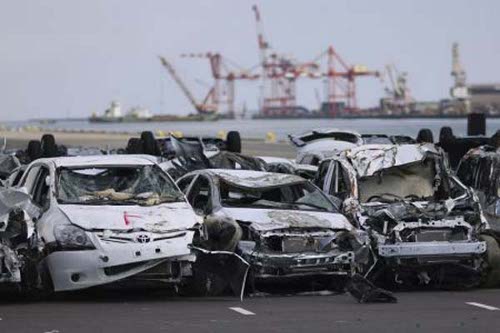 Toyota, and Japan in general, overcomes setbacks from a massive natural disaster faster than anyone expected.

The reason? Automakers don’t build cars – suppliers do. Suppliers build just about every part of a vehicle except the engine, and then the automaker takes all those parts and puts them together. Toyota might get credit for the final product, but 10,000+ suppliers build the wire harnesses, wheels, wood grain interiors, etc.

When Japan suffered from a natural disaster, thousands of suppliers big and small suffered too. Some plants completely collapsed, most suffered some kind of damage, and all suppliers had to deal with a complete loss of electrical power for weeks on end. Toyota’s assembly plants across the world depended on Japanese suppliers, so production of American-made vehicles like the Tundra, Tacoma, and Camry slowed to a crawl as Japan recovered.

Some of Toyota’s executives said that recovery would take the rest of the year – that full production wouldn’t resume until 2012. Amazingly, those predictions will not come to pass. Toyota anticipates full production capacity by September or October. Here’s how they did it:

1. Free labor for suppliers. In the days immediately following the earthquake, many autoworkers were told to stay home. There were no parts and no cars to build, and only minor facility damage, so there was nothing for them to do. However, Toyota offered their workers the opportunity to collect their full salary while helping hard-hit suppliers get back to production. By paying their workers to help their suppliers, Toyota helped get the ball rolling that much faster.

What’s more, building relationships with suppliers like this will pay dividends for years to come. Very shrewd move on Toyota’s part.

2. Using less electricity. One of Japan’s biggest problems following the earthquake was diminished national power production. In order to help reduce electricity demand, Toyota (and many other Japanese companies) have:

3. Re-engineering the parts chain. Toyota execs and engineers have worked diligently to reduce the number of parts bottlenecks, using a wide array of tools. Some suppliers with fully-operational plants were given temporary contracts to produce parts that a competitor couldn’t build. Some suppliers were given engineering and disaster recover assistance to help solve problems at the plant. Some vehicle options have been temporarily eliminated to reduce demand for critical parts.

4. Crisis bring out the best in people. When a disaster strikes, the tendency is to assume the worst. Yet often times disasters provide people with extraordinary motivation and subsequent effort. At every point in Toyota’s supply chain, there is a worker giving his or her all to get Japan back on track.

It’s a testament to humanity that our most trying times are often our most productive times. Congratulations to Toyota, Toyota suppliers, and the people of Japan for getting the company (and their country) back on track so quickly. While there is still much work to be done, it’s safe to say that the worst is over.