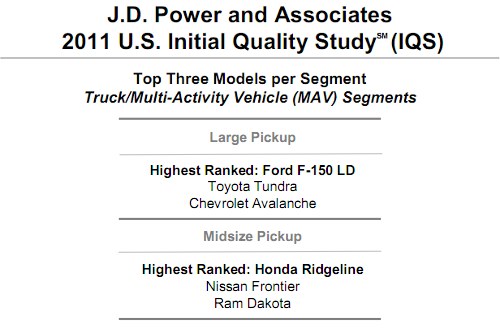 Please note that these are brand quality ratings and therefore only generally useful when considering a specific vehicle model for purchase. However, having said that, it’s important to recognize that the bulk of GMC’s products are trucks, so GMC’s rating of 104 PP100 is probably fairly representative of the quality of the average Chevy/GMC pickup.

Additionally, the bulk of Ram’s products are the Ram 1500 and the Ram HD. The Ram brand’s quality rating of 114 PP100 (about 7% worse than average) is also a likely representation of the quality of the average Ram truck.

While it’s hard to say with certainty, based on the data presented it seems likely that the best quality trucks are, in order: F-150, Tundra, Chevy/GMC (excluding Avalanche), with Ram bringing up the rear. Nissan falls in there somewhere too, but it’s hard to say where. Typically, older models that have been in production for a few years (and that have all the bugs worked out) have higher quality ratings, so it’s entirely likely the Ram is last in the segment in terms of quality.

As a brand, Lexus offers the highest quality vehicle on the market (at least according to this survey). With only 73 problems per 100 vehicles reported in the first 100 days of ownership, Lexus quality is almost 50% better than the industry average. That’s a monumental achievement and a feather in the cap of Toyota.

Toyota also won awards for having two of the three highest quality auto plants on the planet. Toyota’s Cambridge South Ontario plant (which builds the Lexus RX) and Toyota’s Kyushu 2 plant (which also builds the Lexus RX, as well as the IS and ES) both won awards for having phenomenally high quality ratings – only 24 problems reported per 100 vehicles.

Surprisingly, the Toyota Tacoma was shut out of JD Power’s small truck quality awards. The winner in the small truck category was the Ridgeline, followed by the Nissan Frontier and, surprisingly, the Ram Dakota. In what may only be interesting to me, Honda is likely to discontinue the Ridgeline while Ram is basically going to throw away the existing Dakota and start over with a completely new car-based design in 2014. How many other JD Power segment quality winners will be discontinued and/or completely and totally revamped in the next year or two?

Chevy/GMC dominated the quality awards in the large SUV segment. This is another nail in the coffin of the Toyota Sequoia, a model that may disappear by 2014 (only our sources continue to deny this). The Ford Expedition, which sells in similar volumes and which was also shut-out in the large SUV segment, may be discontinued as well (only that seems less likely).

Finally, for those who doubt the value of JD Power’s initial quality study, consider this: Consumer Reports ranked the Chevy Avalanche far ahead of the rest of the large truck field, with the Toyota Tundra and the Ford F-150 coming in 2nd and 3rd overall in the segment. Consistent ratings despite different methodologies and different surveys are a pretty good indicator of the value of JD Power’s study. It’s not definitive, but it certainly shouldn’t be ignored either.