Is it a car, a futuristic video game, or a really weird internet cafe? Whatever it is (it’s a car), at the very least the Vii is a mechanical interpretation of the how Toyota is using technology to change how we drive. 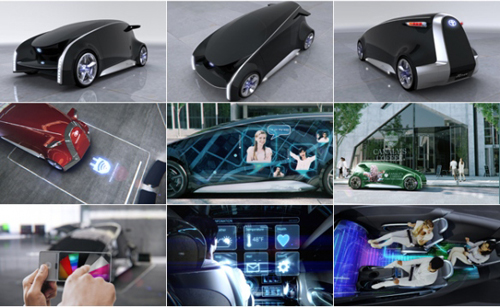 What the heck is it? It's a fun concept vehicle, Toyota Fun Vii, that's full of technological innovations.

Toyota has developed the Fun Vii, a concept vehicle that has the ability to completely sync with its driver’s smartphone and turn the entire car into one giant control panel. With an interactive display built into the car’s cabin, passengers can adjust the radio or communicate with other vehicles while the driver uses the vehicle’s voice-activated navigation system.

This new vehicle debut comes on the heels of Toyota’s other recent announcement that it will partner with Intel to create the next generation of in-car communication and information systems has set the automotive world abuzz. Always a forward-thinking carmaker, Toyota appears to be building an interactive control panel to rival Ford’s “Sync” technology that relies heavily on mobile communication technology.

Toyota’s current interactive in-car system, Entune, currently connects vehicles with their owners’ smartphones for ease of communication with friends and family as well as to internet services like Pandora Radio.

Within a couple of years, the Toyota-Intel partnership will yield results far more advanced than this, including direct vehicle-to-vehicle communication systems and real-time traffic reports including information on accidents in the vehicle’s vicinity.

In line with Toyota’s commitment to supplying its drivers with the latest technology and modern conveniences, Toyota’s cars of the future will automatically communicate with their drivers’ family and friends to reduce distraction and increase efficiency. Examples of this sharing could be:

Automakers have only just begun to harness the power of networked vehicles. Thanks to its partnership with Intel, forward-looking Toyota is once again on the cutting edge of technology.