In an effort to meet European fuel economy and emissions standards, world-renowned Aston Martin is going to produce a high MPG mini-car called the Cygnet City Car. In order to preserve exclusivity, this vehicle will only be available to current Aston Martin owners.

Seeing as how Aston Martin isn’t in the mini-car business, they approached Toyota about re-badging the Toyota iQ. 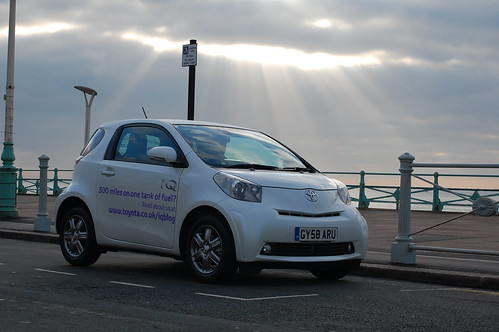 The next Aston Martin. Seriously.

OK – so it’s likely a little more than a “re-badging.” Aston Martin is going to put their own personal touch on the iQ with interior and exterior refinements. However, they’re likely going to leave the powertrain intact in order to preserve the fuel economy rating of the iQ and the boost that will bring to Aston’s fleet.

Since Aston and Toyota aren’t natural competitors, and since Toyota is always interested in selling more vehicles, this partnership makes some sense. While there are some branding concerns on Aston’s side (some call it an abomination), it seems like a simple and logical way to help Aston’s fleet meet fuel economy and emissions regulations.

So, are there any other Toyota – Aston Martin partnerships worth considering?

The short answer? Probably not. Aston Martin isn’t interested in diluting their brand exclusivity by sharing platforms or powertrains with Toyota, so whatever “partnership” occurs will likely be one-sided. Still, there are some moves that Aston and Toyota could work together on:

Most likely, none of these ideas will come to fruition…but never say never. James Bond never would have believed that Aston would be making a 67 hp “City Car,” but here we are.