However, size isn’t really the problem…kind of. Part of the reason that small hybrids are popular with automakers is because they represent the easiest sales opportunity. Small car buyers are already interested in fuel economy, so making a super-fuel-efficient small hybrid makes marketing sense. Small hybrids are also easier to design, less expensive to produce, and not subjected to the abuse that a typical truck would endure. 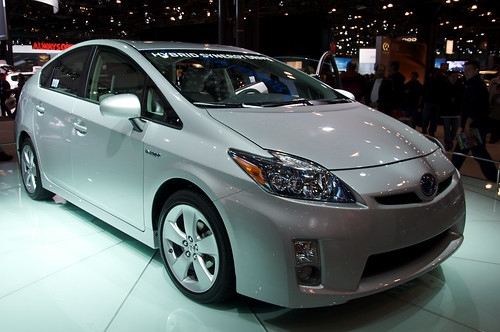 Small cars, like this Toyota Prius, are ideal candidates for hybrid conversion. But what about trucks?

As for big electric motors being needed to move big pickups, it’s true…but big motors are getting cheaper every day. In fact, it turns out that pickups, with their big frames, heavy-duty suspensions, and extra cargo space are actually quite suited for hauling lots of batteries, a prerequisite for any plug-in electric vehicle. Trucks are built to haul the battery power they need.

Since trucks are built to haul and tow, they thrive on torque. By nature of their design, electric motors provide almost infinite torque, meaning that electric motors are ideally suited to most pickup truck applications. Unfortunately, infinite torque requires a LOT of energy…which means you need a lot of powerful batteries to get the job done. Which brings us back to size. It’s not the size of the truck, so much as the amount of power that a truck needs to do it’s job.

Money. Part of the issue is that the costs associated with electric vehicle components have only recently begun to fall. For most of the last 15 years, the idea of equipping any vehicle with a reliable battery pack that was big enough to hold lots of power for a plug-in pickup was a pipe dream. Today, battery pack costs are falling and reliability is increasing.

Battery capacity. Again, just like costs, only recently have powerful, large-scale battery packs become technologically feasible. Up until a few years ago, it simply wasn’t possible to create a battery pack that would propel a large pickup – at least not without weighing thousands of pounds.

Wear and tear. Pickup trucks are used and abused. Every automaker over-designs their trucks to make sure they last. Plug-in technology isn’t quite mature enough to handle the abuse…but it’s close.

The good news for all you truck owners is that you don’t have to wait for an automaker to build a plug-in pickup. With some know-how, some minor sacrifice, and a big fat wad of cash, you can go electric all on your own. We’ll have more on Electric Pickup Truck Conversions later.